Fair lending laws prohibit lenders from discriminating on the basis of race and other characteristics. The Office of the Comptroller of the Currency oversees national banks' compliance with these laws. We found that the Office:

Number of Fair Lending Examinations Conducted at Midsize and Community Banks Supervised by the Office of the Comptroller of the Currency, 2012-2021 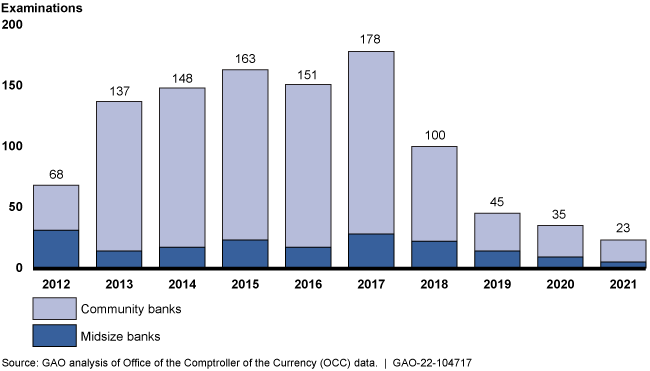 The Office of the Comptroller of the Currency's (OCC) activities to oversee banks' compliance with fair lending laws include the following:

GAO's review of 10 examinations of potential discrimination in loan underwriting or pricing found that OCC examiners generally followed policies and procedures consistently. However, in reviewing five examinations of potential redlining, GAO found that examiner guidance did not account for new statistical methods used to analyze redlining, and examiners followed some procedures inconsistently. Examiners for three examinations did not find the banks' responses disputing the statistical findings satisfactory and concluded that the banks potentially engaged in redlining. Examiners for two examinations considered the banks' responses. They also conducted additional analyses to support or contradict interpreting identified disparities to be the result of intentional discrimination. They concluded the banks did not engage in redlining. The guidance lacks specificity in some procedures in light of new statistical analyses. Since examiners' conclusions are the basis for supervisory action, updated and clearer guidance could help ensure the consistency of redlining examinations and enforcement of fair lending laws.

OCC has made major changes to its annual process for screening retail lending activities at midsize and community banks, which significantly decreased the number of annual fair lending examinations since 2018. These changes likely contributed to a decrease in informal supervisory actions in 2018–2020. OCC staff said they make periodic process changes to conduct more targeted examinations and better manage resources. For example, the revised screening process is intended to identify lending activities with elevated fair lending risk, and examiners are to select all of these activities for examination, as resources allow—a change from the previous practice of selecting generally one activity per bank. However, OCC has not assessed the impact of conducting fewer examinations on its ability to detect deficient practices at smaller banks. Staff said they plan to centralize some information to facilitate such an assessment, but OCC has not established time frames for implementing this plan. Going forward, centralized data linking the screening, selection, and examination outcomes would allow OCC to better evaluate the trade-offs between efficient resource allocation and the effectiveness of its fair lending examinations.

The Fair Housing Act and the Equal Credit Opportunity Act prohibit discrimination in access to most forms of credit transactions based on race, national origin, and other characteristics.

GAO was asked to review OCC's oversight of fair lending laws. This report examines (1) how OCC identifies and addresses any deficient fair lending practices at supervised banks and refers potential violations to DOJ, (2) the extent to which OCC examiners followed policies and procedures in selected fair lending examinations, and (3) how changes to examination selection processes have affected oversight.

GAO reviewed OCC data and documents related to its fair lending oversight activities, such as policies and procedures, and files from a nongeneralizable sample of 15 fair lending examinations. GAO also interviewed staff from OCC, DOJ, other agencies, and advocacy groups.

GAO recommends that OCC (1) take into account new types of analysis when it updates redlining examination procedures and (2) establish time frames for carrying out its plan to centrally track information on smaller bank fair lending examination screening, selection, and outcomes and analyze the information on an ongoing basis to help balance examination effectiveness and efficiency given available resources. OCC generally agreed with GAO's two recommendations and described planned actions to address each recommendation.