The F-35 is DOD’s most ambitious and costly weapon system. But DOD’s strategy for maintaining the aircraft’s highly advanced engine has shortcomings.

DOD's strategy allows 6% of F-35s to be unavailable for missions at any given time due to engine issues. But the number of F-35s that this leaves available for operations isn't what the military services consider to be sufficient. Also, DOD currently exceeds the 6% limit—in part because its strategy doesn't ensure enough spare engine parts are available. As a result, 9% of F-35s were not operational in mid-2020.

Our recommendations address this and other issues we found. 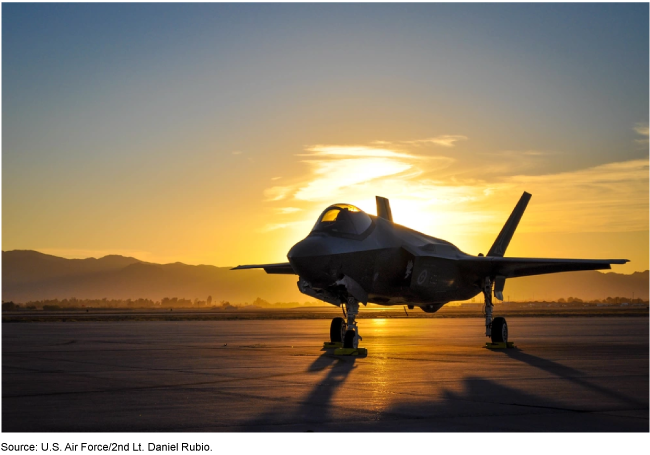 The Department of Defense's (DOD) F-35 engine sustainment strategy does not meet the desired outcomes of the military services. DOD's current strategy, if implemented as planned, allows for 6 percent of its F-35 aircraft to be non-mission capable, or unable to perform assigned missions, due to engine issues. The military services desire outcomes similar to their other tactical fighter aircraft, which since 2017, have generally experienced 1 percent or less of aircraft being unable to operate due to engine issues, according to officials. Until DOD assesses its F-35 sustainment strategy, including its goals, and reaches agreement on any needed changes, the program will fall short of the desired outcomes of users.

DOD has not met several key performance goals for sustaining the F-35 engine. First, DOD only met its 6 percent or less non-mission capable due to engine issues goal in one month from January 2021 through February 2022. As a result, the number of F-35 aircraft unable to fly due to the lack of an operating engine has been increasing since January 2020 with a slight decrease from July 2021 through February 2022. Second, DOD has met three of five of its reliability and maintainability goals—metrics aimed at ensuring that the F-35 engine will be available for operations as opposed to out of service for maintenance. The goals that DOD has not met have resulted in higher-levels of maintenance.

DOD has developed and is implementing corrective-action plans since fall 2020 to improve the capacity of its engine-repair maintenance depots. DOD's plans have resulted in improvements, such as reducing the time to repair a key module of the engine from 207 days in October 2020 to 119 days in January 2022. However, DOD's plans are highly dependent on assumptions about obtaining funding and its ability to address future risks. One area that has not been fully addressed is an agreement between DOD and the prime contractor on a model for forecasting spare parts needs. The prime contractor and DOD are using different data inputs to estimate spare parts needs. Until addressed, the program risks future parts shortages that could affect its ability to repair engines and ensure F-35 aircraft have operating engines.

The F-35 aircraft, with its advanced capabilities, represents a growing portion of DOD's tactical aviation fleet—with over 400 aircraft in use to date. DOD plans to procure about 2,000 more F-35s with estimated life-cycle costs of the program exceeding $1.7 trillion; $1.3 trillion of those costs are associated with sustaining the aircraft. GAO previously reported that challenges sustaining the F-35 engine may pose its greatest sustainment risk over the next 10 years.

This report evaluates the extent to which (1) the F-35's engine sustainment strategy has been aligned with military service desired outcomes; (2) DOD has met performance goals for sustaining the F-35 engine; and (3) DOD has developed and implemented plans to address any challenges. GAO reviewed program documentation, analyzed sustainment data, and interviewed officials from DOD and the prime contractor for the F-35 engine, Pratt & Whitney.

GAO is making two recommendations to DOD: assess and make changes to the F-35 engine sustainment strategy; and develop a shared model for forecasting spare parts needs with the engine's prime contractor. DOD concurred with both recommendations.