While many media companies now recognize the importance of diversity on screen and in print, Hispanic workers were underrepresented in the media workforce from 2010-19.

The Equal Employment Opportunity Commission and the Federal Communications Commission share responsibility for protecting media workers from discrimination. But EEOC no longer shares data on discrimination complaints filed against the media companies that FCC oversees.

Also, EEOC doesn't know if all unions that are required to file member demographic reports are doing so. But it needs the reports to investigate discrimination complaints. 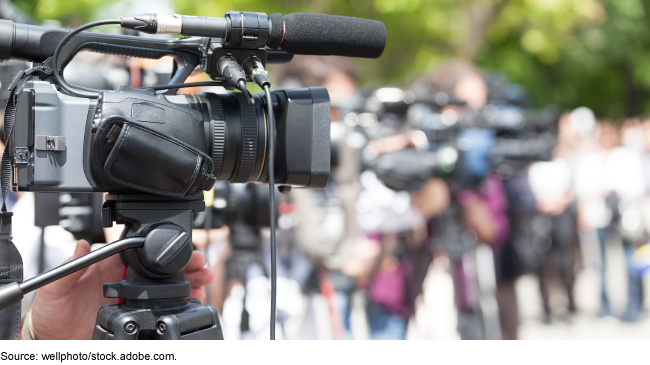 Hispanic workers are underrepresented in the media industry compared to their representation in the rest of the U.S. workforce. Little change occurred from 2010 through 2019, according to GAO's analysis of the Census Bureau's American Community Survey data (see fig.). The extent of underrepresentation in the media varied by occupation and gender. Stakeholders GAO interviewed identified challenges Hispanics may face working in the industry, such as access to professional networks.

Estimated Percentage of Workers in the Media and in Non-media Industries Who Are Hispanic, 2010 through 2019 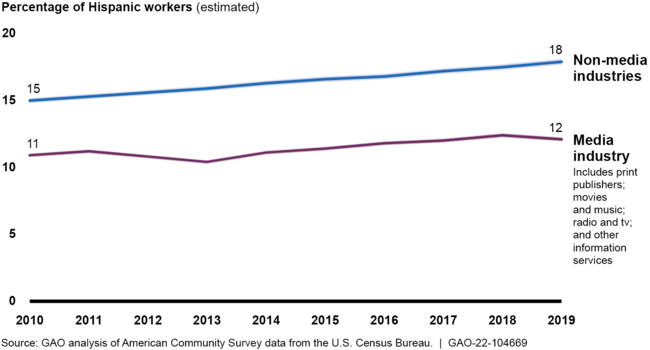 Note: Estimates in the figure have relative standard errors of less than 4 percent.

Federal agencies use complaint investigations and audits to enforce equal employment opportunity (EEO) requirements in the media industry, but gaps in agencies' data sharing and union reporting may hinder enforcement. The Federal Communications Commission (FCC) and the Equal Employment Opportunity Commission (EEOC) no longer have an agreement in place to enable EEOC to share enforcement data. FCC instead relies on companies to self-report discrimination complaints filed against the companies. EEOC's sharing of such data could help FCC determine company compliance with EEO rules. Additionally, according to some stakeholders we interviewed, unions play an important role in helping some media workers obtain employment, and EEOC requires certain unions to file a report on member demographics. However, EEOC officials do not know whether the list of filers is missing unions that should file, nor when the list was last comprehensively updated. Officials told GAO they were exploring options for updating the list. By improving its approach to identifying unions required to file the reports, EEOC will have more complete information to consider when investigating discrimination complaints.

The media industry plays a key role in educating and entertaining the public, but some policymakers have raised questions about workforce diversity in the industry. EEOC, the Office of Federal Contract Compliance Programs (OFCCP), and FCC generally oversee media companies' compliance with EEO requirements. GAO was asked to review the representation of Hispanics in the media industry and related federal oversight.

This report examines (1) the representation of Hispanics in the media industry over the last decade, (2) steps selected media companies publicly reported taking to increase workforce diversity, and (3) how key federal agencies have enforced federal EEO requirements in the industry.

GAO is making three recommendations, including that EEOC and FCC develop a data sharing plan. FCC agreed and EEOC neither agreed nor disagreed with these recommendations. Both agencies said they have begun taking steps to address them.