GSA identified challenges with this process, such as months-long review times and limited funding, that make it difficult to complete needed maintenance and repairs. However, GSA has neither fully assessed the process nor expressed its concerns and ideas for potential changes to Congress.

We recommended that GSA assess the effectiveness of the prospectus process and inform Congress about its findings. 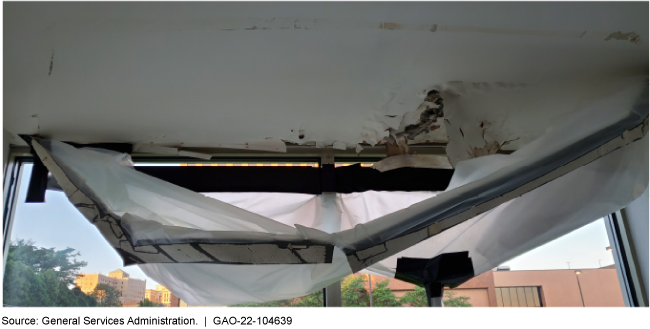 The Public Buildings Act of 1959, as amended, requires the General Services Administration (GSA) to submit a proposal (prospectus) for capital and lease projects with an estimated cost that exceeds a certain dollar threshold to two congressional-authorizing committees. Per GSA guidance, GSA's 11 regional offices develop prospectuses that describe the projects. GSA's Central Office and the Office of Management and Budget each review the prospectuses before GSA submits them to the authorizing committees. GSA obtains these committees' approvals before obligating appropriated funds for the project.

Steps and Time Frames for the Development and Approval of the General Services Administration's (GSA) Prospectuses, Fiscal Years 2014–2020

GSA has taken steps to assess some aspects of the prospectus process. For example, GSA assessed its leasing process and found it needed to submit prospectuses to the committees earlier to reduce extensions on existing leases while awaiting committees' approvals. However, GSA has not completed a full assessment of the prospectus process, including the process for capital projects. GSA officials stated that challenges related to the prospectus threshold, delayed approvals, and limited funding contribute to difficulties GSA faces in managing its portfolio (e.g., addressing repair and maintenance backlogs). While GSA has identified potential changes that would require legislative action, it has not communicated its concerns or potential changes to the authorizing committees. By fully assessing the prospectus process and communicating with the authorizing committees, GSA can work with the committees to address any risks posed by the process, while also ensuring that any changes do not impede the committees' oversight activities.

Each year, GSA spends hundreds of millions of dollars in funding to construct, repair, and alter buildings in its portfolio and another $5.7 billion in rent for over 8,000 leases of privately owned space. GSA's prospectus process can pose challenges to its ability to effectively manage its assets.

GAO was asked to review GSA's prospectus process. This report: (1) describes GSA's process for developing and obtaining approval of prospectuses; (2) determines average time frames for prospectuses' reviews and approvals; and (3) examines the extent to which GSA has assessed the prospectus process to identify and address challenges, if any, that may affect GSA's management of federal assets. GAO reviewed, among other things, relevant statutes and regulations and GSA documents; analyzed data for prospectuses submitted for funding for fiscal years 2014 through 2020; and interviewed GSA and OMB officials.

GAO recommends: (1) that GSA fully assess the prospectus process for leases and capital projects—including identifying, analyzing, and responding to risks associated with the process—and implement potential improvements to the process, and (2) that GSA communicate to its authorizing committees the results of its assessment, including any proposed changes that may require legislative action to implement. GSA agreed with the recommendations and stated that it is developing a plan to address them.