Broadband internet is increasingly critical for work, school, shopping, and other parts of daily life. The COVID-19 pandemic underscored the "digital divide" and the disadvantages for people who don't have access.

In its efforts to expand broadband access, the federal government has subsidized investment in rural areas that haven't attracted private investment. We identified over 100 federal programs—administered by 15 agencies—that could be used to expand access.

However, the number of programs has led to a fragmented, overlapping patchwork of funding. We recommended synchronizing federal efforts with a national broadband strategy, and more. 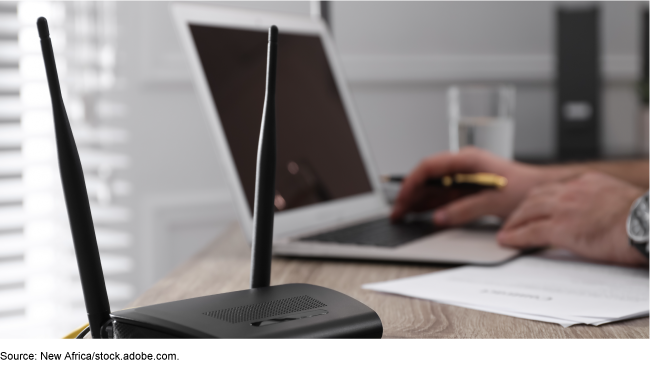 Federal broadband efforts are fragmented and overlapping, with more than 100 programs administered by 15 agencies. Many programs have broadband as their main purpose, and several overlap because they can be used for the purpose of broadband deployment, as shown in the figure. Programs can also help with planning infrastructure, making service affordable, providing devices, and building digital skills. Despite numerous programs and federal investment $44 billion from 2015 through 2020, millions of Americans still lack broadband, and communities with limited resources may be most affected by fragmentation.

The Mosaic of 25 Federal Programs with Broadband as a Main Purpose, as of November 2021, by Purpose Category

Agency officials said programmatic differences, including some set by statute, limit their ability to align programs. For example, programs may have differing definitions of eligible areas, populations, and broadband speeds. In 2018, the National Telecommunications and Information Administration (NTIA) led an interagency group that reviewed differing program definitions. However, NTIA did not identify which statutory provisions limit alignment nor recommend any changes. NTIA is responsible for coordinating telecommunications matters across the executive branch and at the end of 2020 gained additional responsibilities for improving broadband coordination. Improved alignment is needed to help address fragmentation and overlap. Without legislative proposals for Congress to consider, agencies may continue to face limitations in aligning programs to close the digital divide.

The U.S. broadband efforts are not guided by a national strategy with clear roles, goals, objectives, and performance measures. In 2021, the Executive Office of the President, through the National Economic Council and in collaboration with other White House offices, took the lead for coordinating broadband programs. The Executive Office of the President has not decided if a national strategy is needed, but it is well positioned to develop and implement one. A strategy to help better align programs could also include legislative proposals for Congress. Without such a strategy, federal broadband efforts will not be fully coordinated, and thereby continue to risk overlap and duplication of effort.

Broadband is critical for daily life. It provides a digital lifeline to education, work, and healthcare. The COVID-19 pandemic highlighted the urgent need for broadband access for all Americans. The President set a goal for universal broadband access by 2030.

GAO was asked to review federal broadband efforts. This report examines: (1) fragmentation and overlap among federal broadband programs and potential limitations to improved alignment and (2) the extent to which interagency coordination efforts are guided by a strategy, among other objectives.

What would your life be like without broadband internet? For many people, it’s hard to imagine not...
Chuck Young
Managing Director
youngc1@gao.gov
(202) 512-4800
Telecommunications
Access to health careBroadbandCommunicationsGrant programsInteragency relationsLocal governmentsTelecommunicationsFederal fundsFederal agenciesCommunities