Federal data that is open—publicly accessible and free to use, modify, and share—is key for government transparency. To increase access to federal data, the OPEN Government Data Act requires agencies to:

It also requires the Office of Management and Budget to issue agency guidance, which it hasn't done yet.

Of the 4 agencies we reviewed, some have made progress on their data inventories, but none are meeting all of the public engagement requirements.

Our recommendations are to help OMB and agencies more fully implement the act. 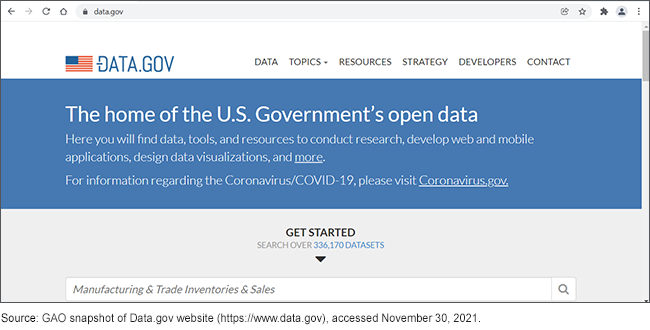 The Open, Public, Electronic and Necessary Government Data Act of 2018 (OPEN Government Data Act) codifies and expands on existing open data policy. It requires, among other things, agencies to publish information as open data by default, as well as develop and maintain comprehensive data inventories.

However, the Office of Management and Budget (OMB) has not issued statutorily-required implementation guidance to agencies on making data open by default and comprehensive data inventories. GAO previously recommended that OMB issue inventory guidance, but that recommendation has not been implemented.

Despite the lack of guidance, selected agencies—AmeriCorps, the Departments of Justice (DOJ) and State, and the Federal Deposit Insurance Corporation (FDIC)—made progress developing data inventories. Specifically, DOJ, the Department of State, and FDIC are at varying stages of updating their data inventories as required under the act. Further, although AmeriCorps lacks a comprehensive data inventory of all of its data assets, it has developed a searchable open data portal.

Regarding engaging with the public, GAO found that the selected agencies had mixed results in addressing all requirements of the act (see figure below). For example, while most of the agencies were assisting the public in expanding use of data assets, none were fully addressing the requirement to publish information on such use. 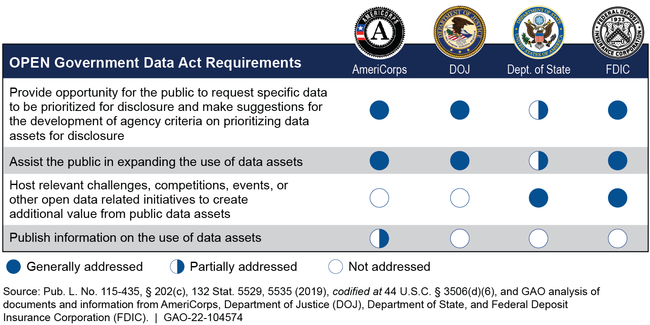 Federal data users spanning the public, private, and nonprofit sectors reported that they use and value a variety of data from across the federal government, such as demographic, spending, economic, and law enforcement data. Data users suggested that creating more comprehensive, standardized, accessible, and curated government data could increase the overall value and usefulness of open data. Full implementation of the public engagement requirements in the act could help address issues identified by federal data users.

Federal agencies create and collect large amounts of data to fulfill their missions. Public access to open data—data that are free to use, modify, and share—holds great promise for promoting government transparency and engendering public trust.

The OPEN Government Data Act includes provisions for GAO to report on federal agencies' comprehensive data inventories and on the value of the data made available to the public, among other requirements.

GAO is making 10 recommendations, including that OMB issue guidance on making data open by default, and that AmeriCorps, DOJ, the Department of State, and FDIC fully address the act's public engagement requirements.