U.S. Border Patrol's immigration checkpoints operate 25 to 100 miles inland from the borders. At checkpoints, agents screen vehicles to identify people in the U.S. unlawfully and they may enforce U.S. criminal laws, such as by seizing illegal drugs.

Agents are required to collect data on checkpoint activity, including how many smuggled people are apprehended and how many drug seizures were made using canines. However, we found that agents at checkpoints inconsistently documented this data, which makes oversight of these checkpoints difficult. 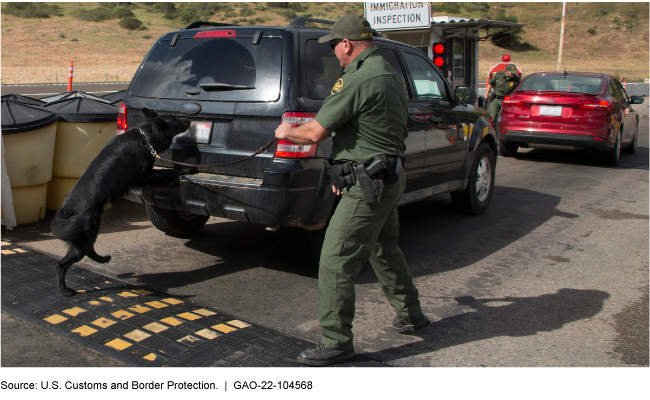 GAO found that while Border Patrol data on apprehensions and drug seizures were generally reliable, certain other checkpoint activity data, including on apprehensions of smuggled people and canine assists with drug seizures, were unreliable. For example, although sector officials said canines were integral to checkpoint drug seizures, there was wide variation across sectors in how often agents documented canine assists with such events. Additionally, Border Patrol developed a tool to collect information about outcomes of secondary inspections at checkpoints. However, because the agency did not require agents to use the tool, only about half of checkpoints did so. Without reliable checkpoint data, Border Patrol does not have the information it needs to assess checkpoint effectiveness, ensure proper resource allocation, or explain checkpoint operations.

Border Patrol established the Checkpoint Program Management Office (CPMO) in 2013 to oversee checkpoint operations. However, Border Patrol has not demonstrated a sustained commitment to ensuring that CPMO carries out its checkpoint oversight activities or held CPMO accountable for implementing these activities. For example, CPMO was not reviewing checkpoint resources and technology—an activity assigned to it by Border Patrol. Further, Border Patrol has not established clear roles and responsibilities for CPMO, consistently and adequately staffed it, or ensured that newly assigned staff have the information they need to carry out CPMO activities. For example, documentation for new staff did not include details on tasks or the past activities of the office. By addressing these program management weaknesses, Border Patrol could ensure that CPMO is better positioned to fulfill its checkpoint oversight mission.

GAO is making seven recommendations, including that Border Patrol take several actions to strengthen checkpoint oversight and data. DHS concurred with each of the recommendations.