The federal government's management of IT acquisitions and operations has been on GAO's High Risk List since 2015.

The Office of Management and Budget's U.S. Digital Service and the General Services Administration's 18F program both develop guidance to assist with federal IT projects and acquisitions. However, we found that these two agencies don't always coordinate on the IT guidance that they develop for the rest of the federal government. This lack of coordination can lead to overlap or duplication of guidance or conflicting guidance.

We recommended that these agencies coordinate their federal IT guidance. 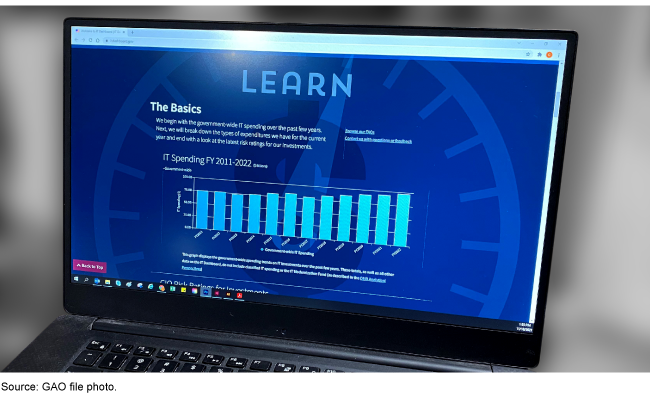 For fiscal year 2021, 26 federal agencies reported 7,806 information technology (IT) investments on the federal IT Dashboard, a public website the Office of Management and Budget (OMB) launched in 2009. OMB requires agencies to report their IT investments on the dashboard and categorize them in various ways that help describe their purpose. For fiscal year 2021, agencies reported their investments in one of three portfolio categories: IT infrastructure, security, and management (45 percent); mission delivery (37 percent); and mission support services (18 percent). Additionally, agencies are to classify each of their investments under one of 225 different service categories. The two service categories with the highest planned fiscal year 2021 spending were IT infrastructure ($17.9 billion) and health care delivery services ($3.9 billion).

Over the past 10 years, GAO has issued 12 reports that included 275 recommendations to agencies to address issues related to duplicative IT, such as weaknesses in the processes agencies used to reduce contract duplication. GAO also made 117 recommendations in six reports to address issues related to IT management roles and responsibilities, such as unclear responsibilities for chief information officers and acquisition officials. As of October 2021, agencies had implemented a total of 290 (74 percent) of the recommendations. Implementing the remaining 102 would provide agencies greater assurance that they are effectively managing IT acquisitions and operations.

Status of GAO Recommendations Related to Duplicative Information Technology (IT) and IT Management Roles and Responsibilities, as of October 2021

OMB's U.S. Digital Service (USDS) and the General Services Administration's 18F program offices help agencies deliver digital services, such as public facing websites and on-line benefit applications. These offices conduct similar activities to fulfill their missions, such as providing IT expertise on agencies' projects, recruiting IT experts, and developing guidance to assist agencies. Although USDS and 18F coordinated on projects and recruiting efforts, they did not always do so to avoid developing duplicative IT guidance. Specifically, neither entity had an established, documented coordination approach, even though they had issued guidance on the same IT acquisition and development topics with similar content. USDS and 18F officials acknowledged the need to improve guidance coordination, but did not have specific plans to do so. Documenting a coordinated approach for developing and issuing guidance would reduce the risk of overlap and duplication, and the potential for conflicting information.

Federal agencies spend more than $100 billion annually on IT to improve mission delivery and support; and enhance infrastructure, security, and management. However, because of longstanding challenges, the federal government's management of IT acquisitions and operations has been on GAO's high-risk list since 2015.

The Modernizing Government Technology Act of 2017 included a provision for GAO to review federal IT programs and entities, including USDS and 18F, and the extent to which they duplicate work.

This report (1) describes investments identified on the federal IT Dashboard, (2) summarizes prior GAO recommendations and current implementation status on IT duplication and management roles and responsibilities, and (3) evaluates USDS's and 18F's efforts to coordinate IT services to avoid overlap and duplication.

To do so, GAO (1) examined IT data reported by 26 agencies on the federal IT Dashboard; (2) identified prior GAO reports that evaluated duplicative IT and IT roles and responsibilities, and determined the number and implementation status of relevant recommendations; and (3) compared USDS and 18F coordination activities with leading collaboration practices identified in GAO's prior work.