We found contract awards for air support have increased since FY 2015. For example, the Air Force awarded an air support contract for $83 million in 2015 and awarded a $6.4 billion contract in 2020.

The Navy, Marine Corps, and Air Force are reviewing their use of these contracts to support training. For example, a Navy review is studying the optimal mix of live, virtual, and other training, which could help determine the future role of contract aircraft. 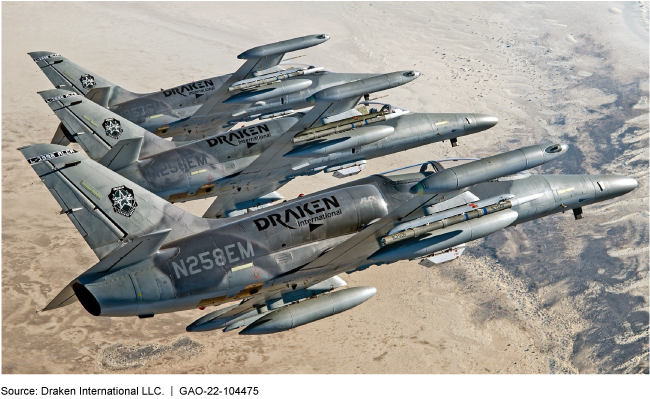 Department of Defense (DOD) components use air support contracts for certain training activities. Such contracts have supported DOD training at locations in the United States, Europe, and Japan (see figure).

DOD components have taken steps to gain greater efficiencies in the use of air support contracts. These steps included consolidating contract administration to reduce redundant costs, among others. DOD components have also established processes to monitor the performance of air support contracts to meet established contracted requirements. The Air Force, Navy, and Marine Corps have taken steps to determine the effectiveness of these contracts, including evaluating the role of air support contracts among other future options for their adversary air training programs. In particular, the services are determining the appropriate mix of training capabilities, to include contract aircraft, as well as affordability and timeframes to modernize U.S. military adversary air capabilities. These reviews, to be completed in fiscal year 2022, are expected to affect future investments in air support contracts, according to DOD officials.