To respond to historic job losses during the pandemic, a temporary federal program expanded unemployment benefits to typically-ineligible contingent workers and others.

Issues ramping up the new program to meet urgent, immense demand meant some claimants went months without income. We also found racial disparities in who received benefits in 3 of 4 states we analyzed, e.g., Black applicants were half as likely to obtain benefits as White applicants in 2 states. 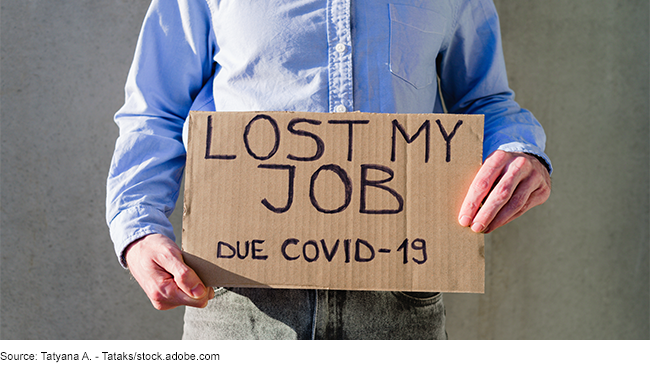 When the pandemic began, states faced historic demand and urgency to pay unemployment insurance (UI) benefits, and their experiences implementing the new Pandemic Unemployment Assistance (PUA) program varied. According to data reported to the Department of Labor (DOL), most states started paying PUA claims by the end of May 2020. States faced high demand for PUA early in the pandemic and demand generally remained high through June 2021. As selected states implemented PUA, they faced IT and staffing challenges, among others, which contributed to payment delays. Selected states also had to balance paying PUA claims quickly with minimizing improper payments.

The 48 contingent workers GAO spoke with in two states experienced sudden unemployment, and those who reported receiving PUA generally said they relied on the benefits to meet their basic financial needs. These workers also faced challenges, such as long wait times for benefits, customer service difficulties, and having to draw on savings or borrow money. With PUA's expiration in September 2021, benefits are generally no longer available for self-employed and contingent workers. DOL does not have plans to comprehensively assess if there are ways for the UI system to support this substantial part of the workforce. Without doing so, DOL may not realize its stated vision for a UI system that provides a lifeline to workers in the modern economy and may limit information available to Congress and other policymakers considering options to support these workers.

GAO found substantial racial and ethnic disparities in PUA benefit receipt in three of four selected states (see table). For example, in two states, the percentage of Black applicants who received PUA was about half that of White applicants. Results from two national surveys show similar disparities in UI receipt. Various factors could explain these disparities, such as how states reviewed claims or whether fraudsters more frequently used certain demographics when filing. In its August 2021 modernization plan, DOL emphasized the need to create a more equitable UI system and subsequently made funds and technical assistance available to states to examine and address equity issues. However, DOL has not yet analyzed the extent and cause of racial disparities in PUA to determine whether such inequities were isolated or caused by broader issues in the system.

Percentage of PUA Applicants Receiving Benefits in Selected States, by Race and Ethnicity

Notes: GAO limited its analyses of Louisiana and New York PUA claims to those prior to influxes of potentially fraudulent claims. GAO excluded the fifth state, Arizona, due to large amounts of potential fraud in multiple months. Minority groups with substantial differences compared to White, non-Hispanic/Latino (the largest group of applicants in each state) are shown with an asterisk.

In response to widespread unemployment caused by the COVID-19 pandemic, the CARES Act created the federal PUA program. The first program of its kind and scale, PUA temporarily expanded unemployment benefits to workers generally ineligible for UI, such as self-employed and contingent workers—those without traditional employment arrangements.

The CARES Act includes a provision for GAO to monitor federal efforts to respond to the COVID-19 pandemic. This report examines (1) how state implementation of PUA varied, (2) how the pandemic affected contingent workers in selected states, and to what extent the UI system assisted them, and (3) how PUA benefit receipt varied by demographic characteristics.

GAO is making two recommendations to DOL to advise the Congress and other policymakers on future options to support unemployed contingent workers and examine the extent and causes of inequities in the receipt of PUA. DOL agreed with the first and partially agreed with the second recommendation, expressing concern that an analysis of PUA would compete with its other efforts to improve equity. GAO continues to see value in this analysis, as discussed in the report.