Under the Americans with Disabilities Act, companies that administer standardized higher education tests—like the SAT or GRE—must grant accommodations to individuals with disabilities. The most common accommodations granted in 2019-2020 were extra time and testing environment adjustments, like preferential seating or a separate room.

But some individuals with disabilities had difficulty providing adequate documentation to justify their requests. And 5 of 6 testing companies we reviewed described issues with reviewing and granting accommodation requests, such as providing accommodations while protecting test integrity. 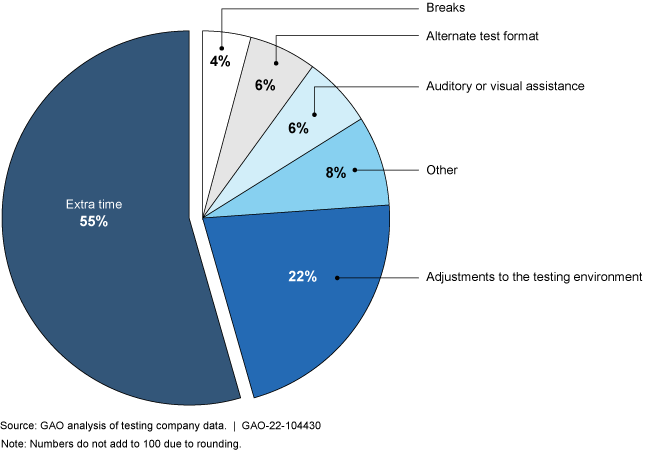 Companies that administer standardized higher education tests grant a variety of accommodations to help ensure their tests are accessible to individuals with disabilities. The most common accommodations granted in 2019-2020 were for individuals who needed extra time or adjustments to the testing environment, according to the most recent data from the six testing companies GAO reviewed (see figure). In determining eligibility for accommodations, officials from those testing companies reported considering factors such as how a disability affects an individual's ability to test under standard conditions and any prior use of accommodations. Officials also said they consider whether a request is appropriate for a particular test (e.g., whether granting it could affect test validity).

The Department of Justice enforces requirements under the Americans with Disabilities Act of 1990, as amended, (ADA) related to testing accommodations. Justice has investigated or referred reports of potential violations, intervened in private litigation, and clarified requirements to promote compliance. From 2017 through 2020, Justice reported receiving and closing more than 90,000 reports of potential ADA violations, of which fewer than 100 pertained to the selected tests in GAO's review. To manage resources, Justice officials said they prioritize reports that could have a broad impact for investigation or referral to U.S. Attorney's Offices. Justice officials also said the agency can intervene in private lawsuits to address systemic problems with testing accommodations. In 2015, Justice issued a technical assistance document to clarify ADA requirements for testing accommodations.

Each year, millions of individuals take standardized tests—like the SAT or GRE—with the goal of pursuing higher education. Under the ADA, testing companies must provide accommodations to individuals with disabilities. Justice is responsible for enforcing ADA requirements related to testing accommodations.

GAO obtained and reviewed accommodation data from the six testing companies that administer the ACT, AP Exams, GMAT, GRE, LSAT, MCAT, PSAT, and SAT. These tests are commonly associated with admission into higher education programs. The data are from 2019 through 2020, the most recent available. GAO also reviewed relevant federal laws and regulations and Justice's data on closed reports and investigations of potential ADA violations pertaining to the selected tests from 2017 through 2020, the most recent data available. GAO interviewed officials from the six testing companies, six disability advocacy organizations selected to reflect a range of perspectives, and from Justice.