The State Department brought home more than 100,000 U.S. citizens and permanent residents from 137 countries during the first 6 months of the COVID-19 pandemic.

Despite acting quickly to assist Americans abroad, State didn't follow some of its own policies and didn't have guidance needed for certain aspects of the effort. For example, State couldn't show that the prices it charged passengers for some chartered flights complied with its fare policy because it didn't have written guidance for calculating and documenting actual costs.

Our recommendations to State could help to improve its preparedness for future repatriations during crises. 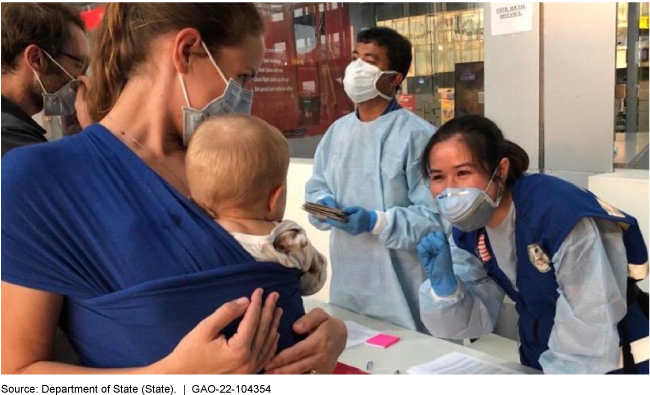 From January to June 2020, the Department of State carried out a historic effort in response to the COVID-19 pandemic, helping to repatriate more than 100,000 individuals who were in 137 countries. In the previous 5 years, State had repatriated fewer than 6,000 people. Most responses to a GAO survey of repatriated individuals expressed positive views of State's communication, among other things, though some expressed concerns about matters such as the prices of repatriation flights. State reported learning several lessons from challenges it faced, such as the importance of using social media and cell phones to communicate with U.S. citizens.

Despite acting swiftly to assist Americans abroad, State did not follow some of its policies and lacked guidance for certain aspects of its repatriation effort. For example, as of May 2021, an interagency group State established to coordinate plans to evacuate U.S. citizens abroad in emergencies had not met since April 2019, hampering interagency communication early in the crisis. Also, incomplete guidance for calculating and documenting actual costs of State-chartered flights led to missing or inconsistent documentation and limited State's ability to show that the prices it charged passengers complied with its fare policy.

Additionally, while State requires overseas posts to take steps to prepare for crises, its oversight of their preparedness has gaps.

As a result of these gaps, State lacks assurance that posts will be prepared to respond to a future global crisis such as the COVID-19 pandemic.

State provides repatriation assistance to U.S. citizens and lawful permanent residents abroad during crises such as the COVID-19 pandemic. State's Office of Crisis Management and Strategy and Bureau of Consular Affairs were primarily responsible for State's COVID-19 repatriation effort.