About two-thirds of maritime cargo is shipped in traditional containers. Non-containerized cargo—like oil or goods in individual crates or pallets—can present inspection challenges for Customs and Border Protection officials.

CBP officials say crated cargo is of particular concern because crates can hide contraband and may include additional barriers to examination.

At the 9 seaports we reviewed that process crated cargo, 4 subjected it to examination only if it had been flagged as at high-risk of containing contraband.

We recommended CPB improve its guidance and identify additional actions its personnel should take to reduce crated cargo risks. 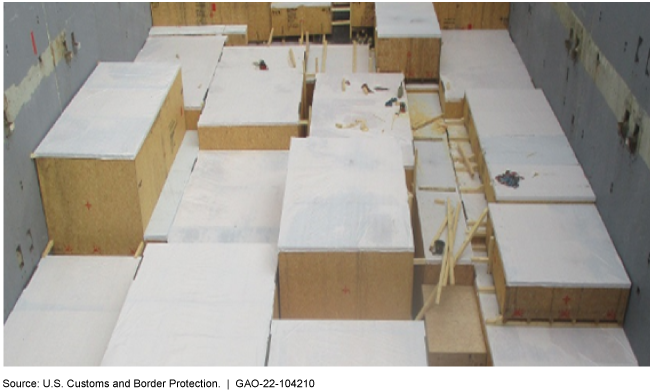 U.S. Customs and Border Protection (CBP) policies and guidance allow for variation in maritime port of entry (seaport) inspections of non-containerized cargo—goods not transported in traditional shipping containers—provided CBP personnel at seaports follow minimum inspection requirements. CBP's inspection procedures and practices for non-containerized cargo varied across the 11 seaports GAO reviewed. Local factors such as the availability of inspection equipment and the type and size of cargo contributed to this variation.

However, inspection approaches at some seaports GAO reviewed may not fully address the increasing risks related to one type of non-containerized cargo—crated cargo. Specifically, CBP's guidance states that some crated non-containerized cargo has grown in size and these shipments pose increasing levels of risk in the maritime environment. This is because crated cargo offers the same level of concealment for contraband or other restricted items as a shipping container and may present additional barriers to examination.

CBP inspection requirements for all non-containerized cargo provide that CBP personnel at seaports are to review information for shipments identified as high-risk. Further, personnel are to, at minimum, physically examine shipments placed on hold for examination through its risk assessment process. However, CBP did not identify additional inspection actions above the minimum requirements for CBP personnel at seaports to address crated cargo risks.

At the nine seaports GAO reviewed that processed crated cargo, CBP applied a range of approaches to its inspections. For example, at five seaports, CBP had additional procedures that may address crated cargo's risk, such as subjecting all crated cargo shipments to examination. However, CBP's procedures at the other four seaports follow CBP's minimum requirements for examining shipments flagged as high-risk and do not subject other crated cargo to examination. As a result, these four seaports' procedures may not address the risks posed by other crated cargo shipments. By identifying additional actions to address crated cargo risks at seaports and updating guidance accordingly, CBP could better ensure it addresses these risks while implementing national policy in a uniform manner.

This report examines the extent to which CBP's inspections of inbound non-containerized maritime cargo vary across selected U.S. seaports.

GAO recommends that CBP (1) identify additional actions that CBP personnel at seaports should take to address the identified risks of crated cargo and (2) update national maritime cargo processing guidance to reflect the identified actions. The Department of Homeland Security concurred with these recommendations.