In 2010, an explosion on an oil rig in the Gulf of Mexico resulted in 11 deaths and the largest oil spill in U.S. history.

Responders applied chemical dispersants to the surface oil slick—to break oil into smaller droplets. This can keep oil from reaching shoreline ecosystems, but may also increase toxic compound exposure for some sea life.

Responders also used dispersants at the wellhead, over 1,500 meters deep, without much information on the risks or effectiveness of doing so.

Subsurface dispersant use isn't well understood. We recommended that the Coast Guard and EPA find ways to improve understanding of using dispersants below the surface.

Use of Chemical Dispersants during a Subsurface Oil Spill 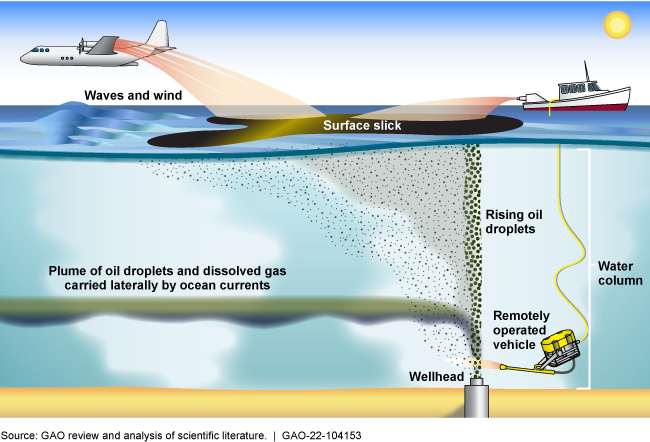 When an oil spill occurs, responders have several options to manage the environmental effects, including using chemical dispersants (see figure). Chemical dispersants used on a surface oil slick can be effective at breaking up floating oil, which can help prevent the oil from reaching shore and harming sensitive ecosystems, according to studies GAO reviewed and stakeholders GAO interviewed. However, the effectiveness of applying dispersants below the ocean surface—such as in response to an uncontrolled release of oil from a subsurface wellhead—is not well understood for various reasons. For example, measurements for assessing effectiveness of dispersants applied at the subsurface wellhead during the Deepwater Horizon oil spill had limitations and were inconclusive. In addition, there are limited experimental data on the effectiveness of subsurface dispersants that reflect conditions found in the deep ocean.

Application of Chemical Dispersants at the Surface by Aircraft and Boat

Chemically dispersed oil is known to be toxic to some ocean organisms, but broader environmental effects are not well understood. Dispersants themselves are considered significantly less toxic than oil, but chemically dispersing oil can increase exposure to the toxic compounds in oil for some ocean organisms, such as early life stages of fish and coral. Other potentially harmful effects of chemically dispersed oil, especially in the deep ocean, are not well understood due to various factors. These factors include laboratory experiments about the toxicity of chemically dispersed oil that use inconsistent test designs and yield conflicting results, experiments that do not reflect ocean conditions, and limited information on organisms and natural processes that exist in the deep ocean.

In April 2010, an explosion onboard the Deepwater Horizon drilling rig in the Gulf of Mexico resulted in 11 deaths and the release of approximately 206 million gallons of oil. During the Deepwater Horizon oil spill, responders applied dispersants to the oil slick at the ocean surface as well as at the wellhead more than 1,500 meters below the surface. The subsurface use of dispersants was unprecedented and controversial.