Through the U.S. Agency for Global Media, the U.S. funds international broadcasting networks—such as the Voice of America and the Middle East Broadcasting Networks—to bring unbiased news to countries where press freedom is restricted. These networks rely on a "firewall" set up in legislation to safeguard their editorial independence and insulate them from outside political pressure. 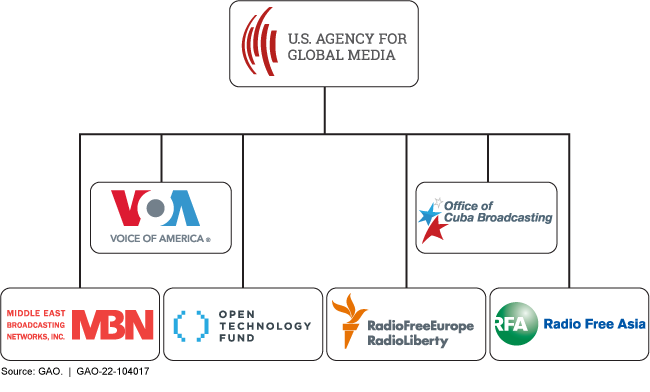 The U.S. Agency for Global Media (USAGM) and the six networks it oversees seek to inform, engage, and connect people around the world in support of freedom and democracy. Amendments to legislation have affected USAGM's governing authorities and organizational structure by shifting authority from a bipartisan board to a Chief Executive Officer (CEO), with advice from an Advisory Board. For example, the legislation granted the CEO the authority to name and replace members of USAGM's grantee boards, which manage the grantee networks. However, some network officials have concerns about certain provisions in the legislation, particularly about the process for selecting grantee board members. Determining how to appoint or remove members of USAGM's grantee boards in a way that includes Advisory Board involvement may help ensure the professional independence and integrity of USAGM's grantees.

Network and USAGM officials said that previous members of USAGM leadership took several actions that did not align with USAGM's firewall principles. According to USAGM, the firewall protecting the networks' independence is central to the credibility and effectiveness of USAGM's networks (see fig.). However, the parameters of the firewall are not specifically laid out in legislation. Delineation of what is and is not permissible under the firewall may help ensure the professional independence and integrity of the agency and its networks.

The U.S. Agency for Global Media's (USAGM) View of Its Legislative Firewall

Various USAGM and network officials told us that some past management actions have hindered USAGM's oversight of networks' operations, but current leaders are taking corrective actions. For example, a halt on funding caused 49 of 60 active internet freedom projects to stop, but leaders have now released the funding. Nevertheless, other actions to ensure accountability of grantees, such as establishing Standard Operating Procedures for Monitoring Grants , have not corrected a longstanding significant deficiency in grants monitoring reported by independent audits of USAGM's financial statements for the past 5 years. USAGM's leaders now have a plan aimed at correcting audit deficiencies by hiring a contractor to implement several grant oversight improvements.

USAGM, formerly known as the Broadcasting Board of Governors, is an independent federal agency whose mission is to provide unbiased news in some countries where freedom of information is restricted. With a budget of around $810 million in fiscal year 2020, USAGM oversees two federal networks—Voice of America and the Office of Cuba Broadcasting—and four grantees—Radio Free Europe/Radio Liberty, Radio Free Asia, Middle East Broadcasting Networks, and Open Technology Fund. Each grantee has a separate board.

A Senate committee report included a provision for GAO to consult with the Committee on Appropriations on an evaluation of USAGM's governance structure and oversight processes for its broadcasting entities. This report examines (1) how recent statutory amendments affected USAGM's governing authority and organizational structure, (2) the extent to which USAGM's management actions aligned with its policies on protecting editorial independence, and (3) the extent to which USAGM has taken actions to ensure oversight of network operations and accountability of its grantees. GAO reviewed relevant laws and agency documents and interviewed USAGM and network officials, including board members.

GAO is making two matters for congressional consideration about the selection of grantee boards and the parameters of the firewall.