The Bureau of Land Management seeks to facilitate safe and responsible oil and gas development on federal lands while providing a fair return for the American people.

There have been several changes to the Bureau's oil and gas leasing process since it was established in 1987, but guidance and related fees haven't kept pace with those changes. For example, lease application fees were intended to cover the costs of administering the process—but the Bureau hasn't fully reviewed its application fees and the costs they cover since 2005.

Our recommendations are to help the Bureau update its oil and gas leasing guidance and examine its fees and costs.

Oil wells near the Bakken Formation in North Dakota 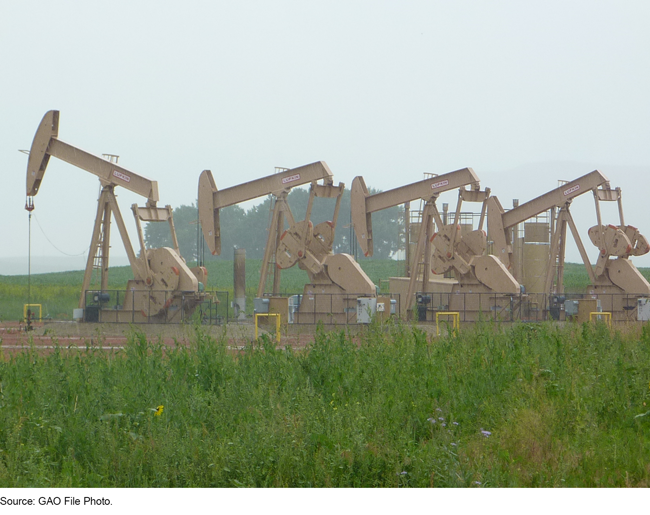 The Department of the Interior's Bureau of Land Management (BLM), which leases federal lands for oil and gas development, has changed some of its leasing policies. For example, starting in fiscal year 2015, BLM was authorized to use online auctions, instead of in-person auctions, to award leases. In 2016, BLM launched an online system for submitting and processing nominations of lands for leasing. However, all of the agency's guidance documents for oil and gas leasing that GAO reviewed were out of date and did not fully reflect these changes, though agency policy requires guidance be updated promptly. Unless BLM reviews and revises its process for updating its guidance, the agency's outdated guidance may continue to lead to inefficiencies for industry and BLM state office staff that spend extra time interpreting outdated BLM guidance.

Acreage Nominated, Offered for Lease, and Leased for Federal Onshore Oil and Gas Development, 2009 through 2019

BLM has not fully reviewed its application fees for oil and gas leases since 2005 despite changes to leasing that could affect program costs, such as the move from in-person to online auctions. BLM has conducted biennial reviews of its existing fees, but these reviews do not assess all of the costs the fees were intended to recover. Until BLM revises its approach to examine all relevant costs and adjusts fees accordingly, the agency may collect too much or too little in fees. In addition, BLM does not charge a fee to nominate lands for leasing and has not re-examined whether to charge such a fee since 2014. Without doing so, BLM risks continuing to expend resources to process nominations that do not result in leases. In addition, the agency may not strike the appropriate balance between encouraging nominations and controlling costs.

BLM leases federal lands for oil and gas development through a process largely established with the Federal Onshore Oil and Gas Leasing Reform Act of 1987. Through this process, the public can suggest which federal lands should be made available for leasing by nominating them. BLM state offices review nominations, including to assess potential environmental impacts. BLM then offers leases at competitive auctions. While no fee is required to submit nominations, BLM charges an application fee for any leases that parties acquire.

GAO is making four recommendations, including that BLM (1) review and adjust its approach for updating agency guidance; (2) revise its approach to biennial fee reviews to include all relevant costs, and adjust fees accordingly; and (3) re-examine whether to charge parties a fee for nominating lands for oil and gas development. Interior agreed with GAO's recommendations.