The Commonwealth of the Northern Mariana Islands, Guam, and Hawaii experienced an unprecedented number of natural disasters in 2018—including typhoons, earthquakes, mudslides, and volcanic eruptions. Their distance from the continental U.S. creates unique challenges for emergency responders.

FEMA has worked to address these challenges, but it could improve disaster recovery in several areas. For instance, the agency could provide speedier housing assistance to survivors. We recommended, among other things, that FEMA streamline its housing assistance process. 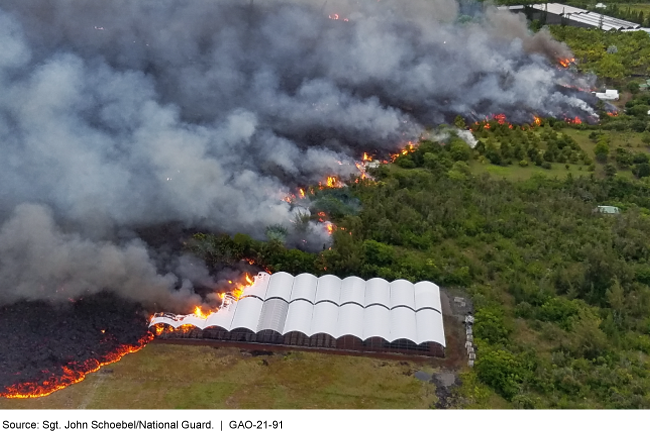 The Federal Emergency Management Agency (FEMA) took steps prior to the 2018 disasters in the Commonwealth of the Northern Mariana Islands (CNMI), Guam, and Hawaii to facilitate response in the region, where time and distance from the continental United States create unique challenges. For instance, FEMA increased the capacity of two Pacific-area supply distribution centers and helped develop area specific disaster response plans. FEMA and its federal partners, such as the Department of Defense (DOD), had varied response roles, which local officials in the CNMI, Guam, and Hawaii considered effective. For example, DOD provided temporary roof repair for disaster survivors in the CNMI.

As of October 2020, FEMA obligated $877 million—more than 70 percent of which was for Individual and Public Assistance missions—following the 2018 disasters and made progress addressing some region specific challenges. However, FEMA has not fully addressed housing assistance issues in the CNMI. For example, it experienced delays implementing its Permanent Housing Construction program in the CNMI due to contracting shortfalls and lack of experienced staff. As of October 2020, only about 30 percent of homes were completed and returned to survivors. GAO found that these housing assistance challenges are consistent with lessons learned from prior FEMA missions in other remote areas of the U.S. Developing guidance that addresses lessons learned in the Permanent Housing Construction program could help streamline assistance to disaster survivors.

GAO also identified delays in FEMA's obligation of Public Assistance program funds—used to repair or replace disaster-damaged public infrastructure such as utilities, roads, and schools—in the CNMI, Guam, and Hawaii. Specifically, on average, it took over a year for FEMA to approve funds for projects awarded after the 2018 disasters. FEMA and local officials identified potential reasons for the delays, including cost estimation challenges. FEMA established cost factors in the CNMI to account for higher construction costs, and GAO found that FEMA collects some data on the timeliness of individual steps in the process. However, FEMA has not analyzed the data to help identify causes of the delays, which could allow it to target solutions to address them.

The CNMI, Guam, and Hawaii experienced an unprecedented number of natural disasters in 2018—including typhoons, earthquakes, mudslides, and volcanic eruptions. FEMA is the lead federal agency responsible for helping states and territories prepare for, respond to, and recover from natural disasters. Due to the remoteness of Hawaii and the Pacific territories, disaster response and recovery can be challenging.

Title IX of the Additional Supplemental Appropriations for Disaster Relief Act of 2019 includes a provision for GAO to review FEMA's response and recovery efforts for 2018 natural disasters, including those in the Pacific region. This report examines (1) how FEMA and its federal partners prepared for and responded to the 2018 disasters in the CNMI, Guam, and Hawaii; and (2) the extent to which FEMA assisted the CNMI, Guam, and Hawaii in recovering from the 2018 natural disasters.

GAO is making four recommendations, including that FEMA (1) incorporate lessons learned into Permanent Housing Construction guidance; and (2) use performance data to identify and address inefficiencies in the Public Assistance program. The Department of Homeland Security concurred, and FEMA is taking actions in response.