Financial exploitation of elders—illegal use of their funds or property—affects the victims, their families, and society. Estimated financial costs to victims are in the billions.

Most state-run adult protective services agencies have provided some data on financial exploitation of elders to the Department of Health and Human Services. But it's hard to collect the data because

not all incidents of exploitation are reported to state agencies

victims can be reluctant to implicate family members or caregivers

HHS and state data systems may not align

We recommended that HHS work with state agencies to improve the data on financial exploitation. 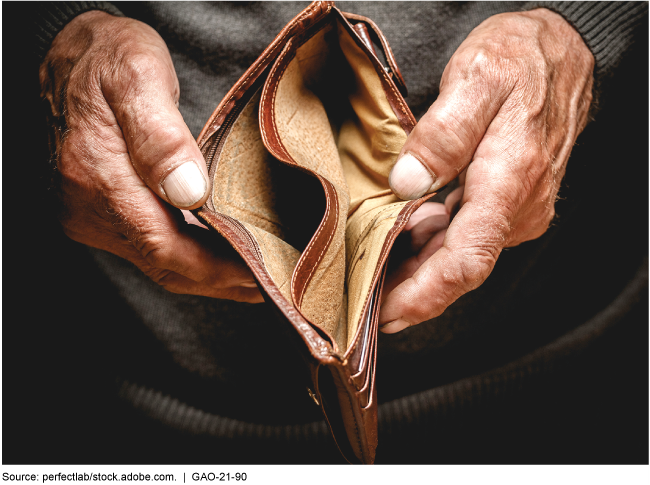 Most state Adult Protective Services (APS) agencies have been providing data on reports of abuse to the Department of Health and Human Services (HHS), including data on financial exploitation, although some faced challenges collecting and submitting these data. Since states began providing data to HHS's National Adult Maltreatment Reporting System (NAMRS) in 2017, they have been voluntarily submitting more detailed data on financial exploitation and perpetrators each year (see figure). However, some APS officials GAO interviewed in selected states said collecting data is difficult, in part, because victims are reluctant to implicate others, especially family members or other caregivers. APS officials also said submitting data to NAMRS was challenging initially because their data systems often did not align with NAMRS, and caseworkers may not have entered data in the system correctly. HHS has provided technical assistance and grant funding to help states address some of these challenges and help provide a better picture of the prevalence of the various types of financial exploitation and its perpetrators nationwide.

Studies estimate some of the costs of financial exploitation to be in the billions, but comprehensive data on total costs do not exist and NAMRS does not currently collect cost data from APS agencies. The Consumer Financial Protection Bureau found actual losses and attempts at elder financial exploitation reported by financial institutions nationwide were $1.7 billion in 2017. Also, studies published from 2016 to 2020 from three states—New York, Pennsylvania, and Virginia—estimated the costs of financial exploitation could be more than $1 billion in each state alone. HHS does not currently ask states to submit cost data from APS casefiles to NAMRS, though officials said they have begun to reevaluate NAMRS with state APS agencies and other interested parties, including researchers, and may consider asking states to submit cost data moving forward. Adding cost data to NAMRS could make a valuable contribution to the national picture of the cost of financial exploitation. Recognizing the importance of these data, some APS officials GAO interviewed said their states have developed new data fields or other tools to help caseworkers collect and track cost data more systematically. HHS officials said they plan to share this information with other states to make them aware of practices that could help them collect cost data, but they have not established a timeframe for doing so.

This report examines (1) the status of HHS's efforts to compile nationwide data through NAMRS on the extent of financial exploitation and the challenges involved, and (2) what is known about the costs of financial exploitation to victims and others. GAO analyzed NAMRS data from fiscal year 2016 through 2019 (the most recent available); reviewed relevant federal laws; and interviewed officials from HHS, other federal agencies, elder abuse prevention organizations, and researchers. GAO also reviewed APS documents and spoke with officials in eight states, selected based on their efforts to study, collect, and report cost data; and reviewed studies on financial exploitation.

GAO recommends that HHS (1) work with state APS agencies to collect and submit cost data to NAMRS, and (2) develop a timeframe to share states' tools to help collect cost data. HHS did not agree with the first recommendation, but GAO maintains that it is warranted, as discussed in the report. HHS agreed with the second recommendation.