The Federal Highway Administration provides funding to states to build and maintain the nation's roads. When using federal dollars states must follow federal standards such as paying prevailing wages. Some states established programs in which local agencies swap federal for state dollars. When they do, they follow state instead of federal standards.

In the last 5 years, 15 states reported swapping programs. The amount of highway funds swapped ranged from less than 1% (Indiana) to about 18% (Iowa). Reports were mixed on whether this meant lower wages for workers and on other potential effects. 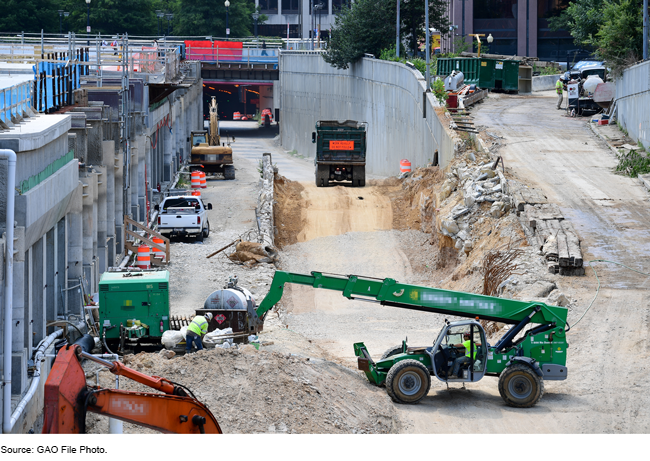 In the past 5 years, 15 states reported they had fund swapping programs, which allow local agencies, such as cities and towns, to swap their state's proposed suballocation of federal-aid highway funds for state transportation funds. This exchange allows local agencies to undertake local projects with state funds, rendering the projects subject to applicable state and local, rather than federal, requirements. For most states, the reported amount of federal funds swapped is a relatively small portion of the state's overall federal-aid apportionment, ranging from less than 1 percent to 12 percent. However, Iowa swapped about 18 percent (or about $97 million) of its federal-aid funds in 2019. See figure. 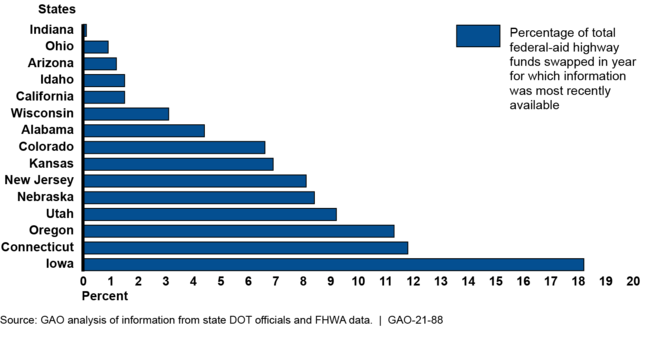 Note: Data are for 2019, except for Alabama, Colorado, New Jersey, and Wisconsin where GAO presents the most recent data these state DOT officials had available.

The impact of fund swapping on wages and other federal requirements cannot be definitively determined because, among other reasons, state DOTs generally do not track data needed to measure these impacts. For example, state officials said that federal funds swapped by local agencies are combined with other federal funds, so they cannot identify which projects were funded with swapped federal dollars. State officials offered mixed views of the impact of swapping on workers' wages and other federal requirements. For example, officials in two states that told GAO their states do not have prevailing wage laws said wages paid were not impacted by the lack of federal prevailing wage requirements because of economic conditions in their states. Officials in two other states said that the lack of a state prevailing wage law potentially enabled contractors to pay their workers less than the federal prevailing wage on swapped projects.

The Federal Highway Administration (FHWA) provides funding to states to build and maintain the nation's roadways and bridges. States must follow applicable federal standards such as laws that require contractors to pay locally prevailing wages. States can make federal funding available to local agencies for projects, but the ability of local agencies to comply with federal requirements is a well-documented risk area. Some states have established “fund swapping” programs where local agencies swap proposed federal funding with the state in return for state dollars. FHWA does not directly oversee these programs, and no federal statutes or regulations authorize or prohibit fund swapping.

GAO was asked to review swapping of federal-aid highway funds and its impact. In this report, GAO describes: (1) the extent to which states and local agencies engage in fund swapping; (2) factors affecting whether state and local agencies engage in federal fund swapping; and (3) what is known about the impact fund swapping has on prevailing wages paid to workers and other federal requirements. GAO reviewed relevant regulations and reports; sent a questionnaire to officials in 50 states; and interviewed officials from 15 state DOTs that reported having swapped funds in the past 5 years and 3 local agencies selected for program size and other factors.

The U.S. Department of Transportation provided technical comments, which we incorporated as appropriate.