Traditional public schools were the most commonly available schooling option for military families in 2019-20. Over 90% of military installations also had at least one other public school option—like a charter or magnet school—nearby. Fewer options were available for rural installations.

Military families in our review considered housing options and school features like academics or extracurriculars when choosing schools and weighed these factors based on their needs. For example, some parents accepted a longer commute to live in a preferred school district. Many families relied on personal networks and social media to inform these decisions. 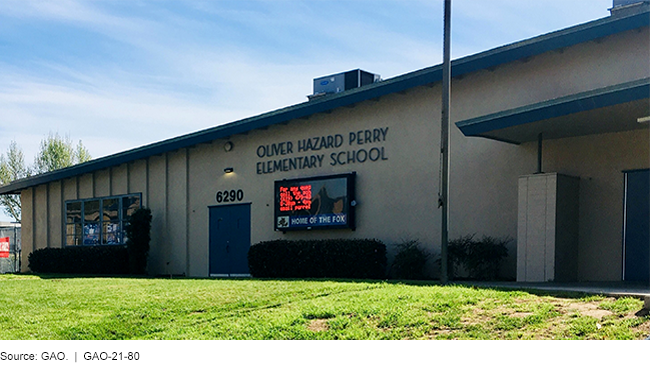 Traditional public schools were the most commonly available schooling option for military families near military installations, similar to schools available to U.S. families in general, according to GAO's analysis of Department of Education 2018-19 data. Over 90 percent of installations had at least one public schooling option nearby—such as a charter or magnet school—in addition to traditional public schools (see figure). Similar to U.S. schools in general, rural installations generally had fewer schooling options compared to their more highly populated urban counterparts. In addition, about one-half of the military installations GAO analyzed are in states that offer private school choice programs that provide eligible students with funding toward a non-public education. At least two of these states have private school choice programs specifically for military families.

Note: According to GAO's analysis of the Department of Transportation's 2017 National Household Travel Survey, the average commuting distance for rural and urban areas is 20 miles and 16 miles, respectively. For the purposes of this report, the term “military installations” refers to the 890 DOD installations and Coast Guard units included in GAO's analysis.

Military families in GAO's review commonly reported considering housing options and school features when choosing schools for their children; however, they weighed these factors differently to meet their families' specific needs. For example, one reason parents said that they accepted a longer commute was to live in their preferred school district, while other parents said that they prioritized a shorter commute and increased family time over access to specific schools. Military families also reported considering academics, perceived safety, elective courses, and extracurricular activities. To inform their schooling decisions, most parents said that they rely heavily on their personal networks and social media.

Approximately 650,000 military dependent children in the U.S. face various challenges that may affect their schooling, according to DOD. For example, these children transfer schools up to nine times, on average, before high school graduation. Military families frequently cite education issues for their children as a drawback to military service, according to DOD.