The Keystone Pipeline has transported over 3 billion barrels of crude oil from Canada to U.S. refineries since 2010. Keystone's accident history is similar to other pipelines, but the severity of its spills has worsened in recent years due to 2 large spills in 2017 and 2019.

The Department of Transportation required Keystone operator TC Energy to investigate and address the root causes of the 4 largest spills. DOT has also issued enforcement actions and civil penalties for problems like inadequate corrosion prevention. Based on Keystone "lessons learned," DOT has increased inspection resources for other pipelines during construction.

A portion of the Keystone Pipeline in South Dakota 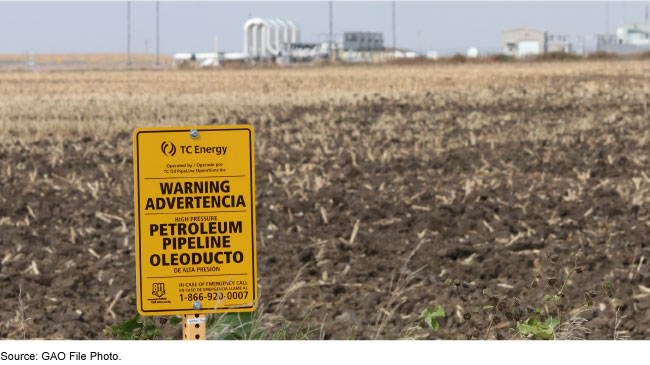 The Department of Transportation's Pipeline and Hazardous Materials Safety Administration (PHMSA) required TC Energy to take additional safety measures specified in a special permit as conditions of allowing certain portions of the Keystone Pipeline (Keystone) to operate at a higher stress level than allowed by regulation. PHMSA reviewed technical information and drew on its experience granting similar permits to natural gas pipelines to develop 51 conditions with which TC Energy must comply. Most pipeline safety and technical stakeholders GAO interviewed agreed the conditions offset the risks of operating at a higher stress level. However, PHMSA did not allow TC Energy to fully operate Keystone at this higher stress level until 2017, after TC Energy replaced pipe affected by industry-wide pipeline quality issues.

Keystone's accident history has been similar to other crude oil pipelines since 2010, but the severity of spills has worsened in recent years. Similar to crude oil pipelines nationwide, most of Keystone's 22 accidents from 2010 through 2020 released fewer than 50 barrels of oil and were contained on operator-controlled property such as a pump station. The two largest spills in Keystone's history in 2017 and 2019 were among the six accidents that met PHMSA's criteria for accidents “impacting people or the environment.” According to PHMSA's measures for these more severe types of accidents, from 2010 to 2020 TC Energy performed better than nationwide averages, but worse in the past five years due to the 2017 and 2019 spills.

In response to each of Keystone's four largest spills, PHMSA issued Corrective Action Orders requiring TC Energy to investigate the accidents' root causes and take necessary corrective actions. These investigations found that the four accidents were caused by issues related to the original design, manufacturing of the pipe, or construction of the pipeline. PHMSA also issued other enforcement actions and assessed civil penalties to TC Energy for deficiencies found during inspections, such as inadequate corrosion prevention and missing pipeline markers. Based in part on its experience overseeing Keystone, PHMSA officials said they have increased resources to conduct inspections during construction of other pipelines and are establishing a more formal process to document and track the compliance of all special permits, including Keystone's permit.

Since it began operating in 2010, Keystone has transported over 3 billion barrels of crude oil from Canada to refineries in Illinois, Oklahoma, and Texas, according to its operator, TC Energy. Prior to construction, TC Energy requested and obtained a special permit from PHMSA to operate certain portions of the pipeline at a higher stress level than is allowed under PHMSA's regulations. Since TC Energy was the first and remains the only hazardous liquid pipeline operator to request a waiver of this particular regulation, the Keystone special permit is unique.