The Department of Defense relies on multiple electronic systems implemented over the last 30 years to maintain health records. It is seeking to replace them with a modern, comprehensive system.

DOD has begun the phased deployment of and made progress on its new electronic health record system, called MHS GENESIS. DOD also improved system performance after the initial rollout.

However, some defects DOD identified remain unresolved and DOD doesn't have plans for additional testing to address them. System users also reported that training and communication about system changes were ineffective. Our recommendations address these issues.

The Department of Defense (DOD) made progress toward implementing its new electronic health record system, MHS GENESIS. DOD deployed the new system to sites in six of 24 planned deployment phases (i.e., waves), which included about 41,600 users (see figure). DOD also improved system performance and addressed issues experienced at the initial sites. Even with this progress, incidents identified during testing—such as system defects—remain unresolved. DOD has not developed plans to conduct additional testing at future sites to ensure the remaining incidents are fully resolved. As a result, unaddressed incidents could lead to challenges at future sites. 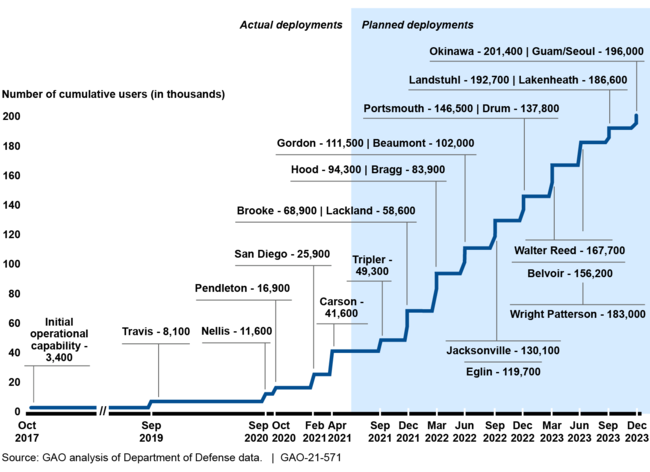 Additionally, implementation of MHS GENESIS faced training and communication challenges. Test results and selected system users indicated that training for MHS GENESIS and the dissemination of system change information were ineffective. For example, the users stated that training was not consistent with the “live” system. Further, users reported that there were too many system changes to keep up with and that they were not adequately informed as changes were implemented. As a result, users were unaware of important changes to their roles or business processes, or to system revisions and improvements. These challenges could hinder users' ability to effectively use the system, impede their knowledge of new workflows, and limit the utility of system improvements. Regarding key program risks, DOD identified and was tracking risks and their associated mitigation plans.

DOD relies on multiple legacy electronic health record systems to create, maintain, and manage patient health information. DOD has determined that these systems, implemented over the past 3 decades, require modernization and replacement. The department has sought to replace these legacy systems with a comprehensive, real-time electronic health record.

The conference report accompanying the Department of Defense and Labor, Health and Human Services, and Education Appropriations Act, 2019 and Continuing Appropriations Act, 2019 included a provision for GAO to review DOD's electronic health record deployment. GAO's objectives were to (1) determine what progress DOD has made toward implementing a new electronic health record system, and (2) identify the challenges and key risks to MHS GENESIS implementation and what steps DOD is taking to address them.

GAO is making three recommendations, including that DOD develop an approach to retesting incidents, improve training, and develop a plan to ensure MHS GENESIS users are aware of system changes. DOD concurred with the recommendations.