Climate change may increase the frequency and intensity of certain natural disasters, which could damage Superfund sites—the nation's most contaminated hazardous waste sites.

We testified that EPA has taken some actions to manage risks at these sites. Also, EPA should provide direction on integrating climate information into site-level decision making to ensure long-term protection of human health and the environment. 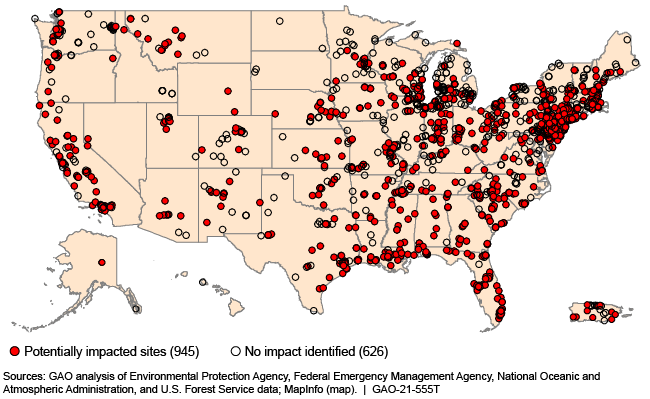 In October 2019, GAO reported that available federal data on flooding, storm surge, wildfires, and sea level rise suggested that about 60 percent (945 of 1,571) of all nonfederal Superfund National Priorities List (NPL) sites—which have serious hazardous contamination--are located in areas that may be impacted by these potential climate change effects (see figure). In 2019, GAO released an interactive map and dataset, available with its report (GAO-20-73).

Nonfederal NPL Sites Located in Areas That May Be Impacted by Flooding, Storm Surge, Wildfires, or Sea Level Rise, as of 2019 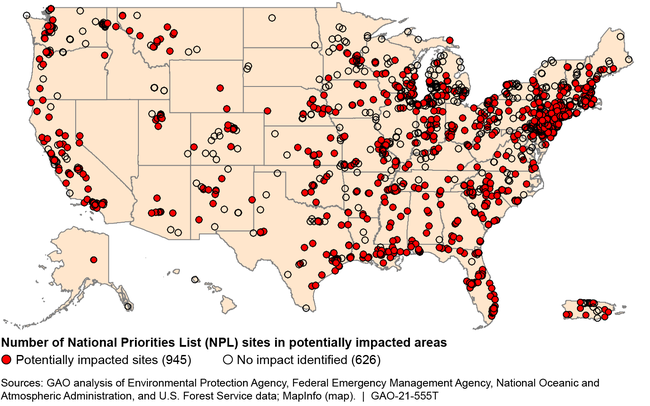 GAO also reported in 2019 that the Environmental Protection Agency's (EPA) actions to manage risks from climate change effects at these sites aligned with three of GAO's six essential elements of enterprise risk management, partially aligned with two, and did not align with one. For example, EPA had not aligned its process for managing risks with agency-wide goals. Without clarifying this linkage, EPA could not ensure that senior officials would take an active role in strategic planning and accountability for managing these risks.

In 2019, GAO found that EPA recognized institutional, resource, and technical challenges in managing risks from climate change effects. For example, some EPA officials told us they do not have the direction they need to manage these risks. Insufficient or changing resources may also make it challenging for EPA to manage these risks, according to EPA documents and officials.

Superfund is the principal federal program for addressing sites contaminated with hazardous substances. EPA administers the program and lists some of the most seriously contaminated sites—most of which are nonfederal—on the NPL. At those sites, EPA has recorded over 500 contaminants, including arsenic and lead. Climate change may make some natural disasters more frequent or more intense, which may damage NPL sites and potentially release contaminants, according to the Fourth National Climate Assessment.

In the report on which this testimony is based, GAO made four recommendations to EPA, including that it more closely align its actions with GAO's essential elements of enterprise risk management. EPA originally agreed with one recommendation and disagreed with the others, but is taking steps to respond to three of the recommendations and is considering action on the other. GAO continues to believe action on all four is warranted.