DOD is acquiring new space systems as its older ones near completion.

Our prior work found that DOD space programs often exceed their budgets and are late.

We also reported on how the DOD space program's organizational structure is changing given the 2019 creation of the Space Force.

In this changing environment, DOD has the opportunity to improve how it delivers new capabilities while avoiding past missteps. 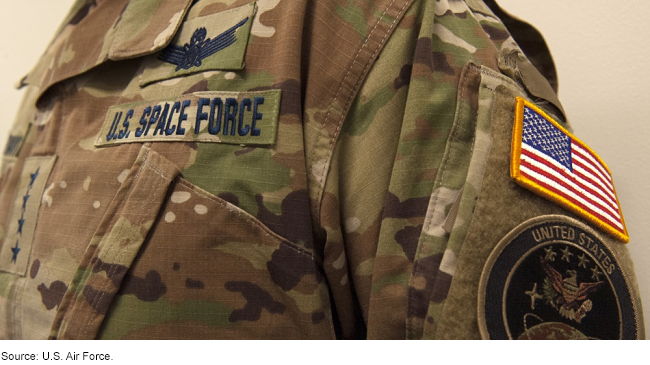 The Department of Defense (DOD) is making changes to its space-related processes and organization that will present both opportunities and challenges to the way it acquires its space systems. GAO has reported over the past decades on challenges DOD faces in its space acquisitions—including schedule delays, multibillion-dollar cost increases, significant reductions in capabilities, and in some cases cancelation—and made recommendations that have improved program outcomes. For example, DOD took actions to implement a GAO recommendation to use an incremental approach to acquiring space launch services. DOD's modified approach reduced risk by allowing it to incorporate knowledge gained from early launch competitions to inform subsequent competitions.

Many of the most troubled programs are nearing completion, and DOD is starting new programs to develop the next generation of capabilities, some of which are being acquired under a streamlined acquisition process known as the middle-tier of acquisition pathway (see table below). Starting new programs is an opportunity to learn from past mistakes and take measures to put programs on successful paths. GAO's work has shown that in many cases, DOD is attempting to do so.

However, DOD faces challenges because it will be starting these new programs amid significant changes to the acquisition environment. Some of these changes are external to DOD, such as increased threats to on-orbit space systems. But over the past several years, DOD also initiated substantial organizational and acquisition process changes.

DOD space systems provide critical capabilities that support military and other government operations. Space systems can be expensive to acquire and field, costing billions of dollars each year. The U.S. Space Force was recently established as the sixth branch of the U.S. military. As planned, the Space Force will consolidate leadership, planning, and management for some DOD space programs, as appropriate and authorized.

This statement discusses the challenges and opportunities DOD faces as it acquires space systems amid changes to the acquisition environment. This statement is based on GAO reports issued over the past 10 years on DOD space programs. It also draws on recent work supporting GAO's 2021 annual report on the progress of major defense acquisition programs.

GAO has made a number of recommendations in previous work to improve DOD's acquisition of space systems. DOD has agreed with and taken action on many of these recommendations. DOD should continue working to implement recent GAO recommendations related to leading practices for acquisitions, including that the Space Command and Control program develop a comprehensive acquisition strategy, and that DOD develop a plan to gain additional knowledge before starting a new wideband satellite communications program.