We testified about ways DOD can improve how it buys its most expensive weapons. Programs are more likely to succeed if they start with a match between a system's needs and the technology, time, and funding available. Achieving this match—along with other knowledge at key points in the program—helps reduce the risk of cost and schedule overruns that have plagued DOD's weapon programs.

DOD reformed how it acquires innovative weapons—giving program managers faster and more flexible options. But it is still figuring out how to evaluate and report to Congress on programs using the new reforms.

DOD weapon system acquisition is on our High Risk list.

The F-35 program cost billions of dollars more than planned due to problems with how DOD acquires innovative weapons. 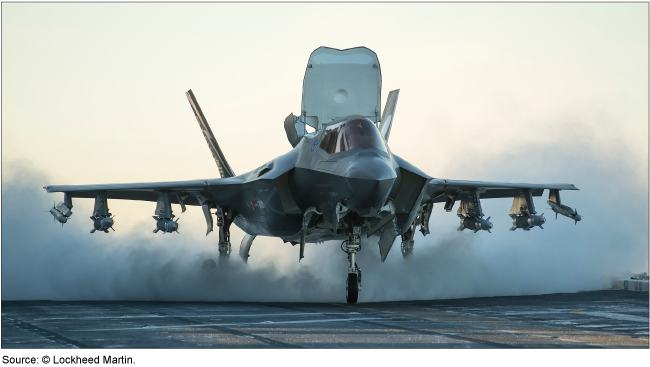 As the Department of Defense (DOD) drives to deliver innovative capabilities faster to keep pace with evolving threats and emerging adversaries, knowledge—about programs' cost, schedule, and technology—increases the likelihood that these capabilities will be achieved.

GAO annually assesses selected DOD weapon programs and their likely outcomes by analyzing: (1) the soundness of a program's business case—which provides evidence that the warfighter's needs are valid and the concept can be produced within existing resources—at program start, and (2) the knowledge a program attains at other key points in the acquisition process. For example, the Navy's Ford-class aircraft carrier program began with a weak business case, including an unrealistic cost estimate based on unproven technologies, resulting in over $2 billion in cost growth and years of delays to date for the lead ship.

DOD's new acquisition framework uses six different acquisition pathways and offers programs a chance to tailor acquisition approaches, providing options to speed up the process. However, preliminary findings from GAO's 2021 annual assessment show that programs using the new middle-tier pathway face increasing risk that they will fall short of expected performance goals as a result of starting without sound business cases. While these programs are intended to be streamlined, business case information is critical for decision makers to know if a program is likely to meet its goals (see figure below). 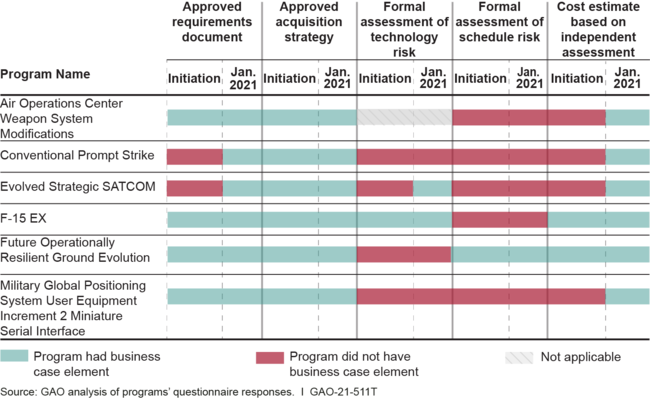 DOD spends billions of dollars annually to acquire new major weapon systems, such as aircraft, ships, and satellites, and deliver them to the warfighter. GAO has reviewed individual weapon programs for many years and conducted its annual assessment of selected major DOD weapon programs for 19 years. GAO added DOD's weapon system acquisition process to its High-Risk List in 1990.

This statement discusses: (1) the performance of selected DOD weapon programs and the role of a sound business case in that performance, (2) DOD's progress implementing recent acquisition reforms, (3) the status of DOD's actions to support innovation, and (4) DOD's efforts to improve data for acquisition oversight. This statement is drawn primarily from GAO's extensive body of work on DOD's acquisition of weapon systems, science and technology, and acquisition reforms conducted from 2004–2021, and observations from an ongoing annual review of selected DOD weapon programs.

Since GAO added this area to its High-Risk List in 1990, it has made hundreds of related recommendations. As of December 2020, 114 recommendations remained open. DOD is currently reviewing an additional recommendation from GAO's draft report on its weapon systems acquisition process and weapon programs.