We made 5 recommendations, including that State develop a plan—and specify the funding needed—to address the backlog. 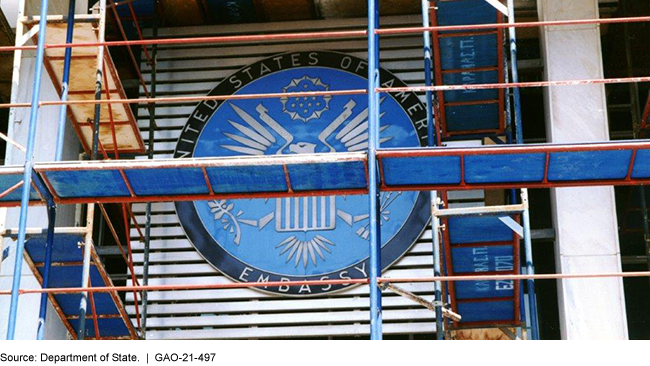 The Department of State's portfolio of overseas assets and expenditures to operate them have grown, but State-allocated funding for maintenance has stayed nearly the same. For fiscal years 2015 through 2019, both the number and square footage of State's assets increased 11 percent and operations expenditures grew 24 percent. However, maintenance and repair funding has remained nearly unchanged. For example, State's allocation for Maintenance Cost Sharing—for projects collectively funded by State and tenant agencies overseas—was $399 million in fiscal year 2016 and $400 million in 2020.

GAO found that more than one-quarter of State's overseas assets are in poor condition according to State's condition standard. Further, 20 percent (almost 400) of assets that State identifies as critical to its mission are in poor condition. Federal accounting standards recognize that what constitutes acceptable asset condition may vary by the importance of specific assets to agencies' missions. However, State set a single acceptable condition standard of “fair” for all assets and did not consider whether some assets, like chancery office buildings, were more critical to State's mission when estimating its $3 billion deferred maintenance backlog. Had State set a higher condition standard for critical assets, its backlog would be higher. By reassessing its condition standard, State could determine whether to adopt an approach that considers asset importance and that could help guide maintenance funding to key assets.

State follows most, but not all, leading practices for managing deferred maintenance backlogs. Of the nine leading practices, GAO found that State followed five, partially followed three, and did not follow one. For example, State has goals, baselines, and measures for its facility management performance. However, State did not specifically request funding to address the backlog in its congressional budget requests. Officials said they had not found it necessary to specifically request such funding because they only determined that the backlog had substantially increased from $96 million in fiscal year 2019 to $3 billion in fiscal year 2020 after using a new methodology for estimating deferred maintenance and repair. In addition, State does not have a plan to address the backlog, but officials estimated it could take 30 to 40 years to eliminate the backlog with current funding levels. Developing such a plan with specific information on the funding and time frames needed to reduce the backlog would help decision makers better understand how funding levels affect backlog reduction.

State's Bureau of Overseas Buildings Operations operates and maintains over 8,500 owned and leased real property assets, including both buildings and structures. According to State, at least 60 percent of a building's total lifecycle cost stems from operations and maintenance costs. GAO has reported that deferring maintenance and repairs can lead to higher costs in the long term and pose risks to agencies' missions.

GAO is making five recommendations, including that State should reassess its acceptable asset condition standard and fully follow leading facility management practices, such as developing a plan to address the backlog and specifically identifying the funding and time frames needed to reduce it. State concurred with these recommendations.