NNSA requires its contractors to adhere to federal, state, and local regulations. However, NNSA's contractors view some of these requirements as unnecessarily burdensome.

NNSA identified 91 requirements its contractors viewed as burdensome, and committed to reviewing 16 of them in a 2019 report. For example, identified requirements included certain security clearance requirements and worker safety regulations. We found that NNSA is working to review and address these issues. 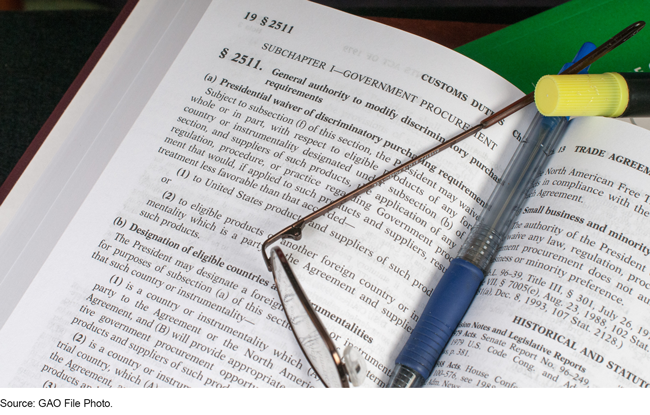 In 2019, the Department of Energy's (DOE)'s National Nuclear Security Administration (NNSA) provided a report to Congress on its findings from its survey of the seven contractors that manage and operate its nuclear security enterprise sites to identify requirements the contractors viewed as burdensome. This survey was congressionally mandated after reports by external groups found that the environment in which NNSA carried out its oversight of such management and operating (M&O) contractors was strained. GAO reviewed information on the following three areas related to NNSA's report:

Comparison of NNSA's findings with related reports. GAO found that during the past 10 years, three external groups carried out studies and assessments of the nuclear security enterprise and issued reports citing ways NNSA's oversight has contributed to burden for M&O contractors. These groups were all directed by Congress to complete their studies, which were published between 2014 and 2020. Their reports also cite ways in which NNSA's oversight may have contributed to increased costs or reduced mission capabilities. NNSA's Burdensome Regulatory Requirements report explicitly identifies 91 requirements that M&O contractors found burdensome; these include requirements found in sources such as DOE and NNSA directives, federal regulations, and statutes.

NNSA actions to address matters that M&O contractors identified as burdensome. In its report, NNSA included a list of 16 matters that it committed to reviewing based on the rating data it collected from M&O contractors and input from members of the Operations and Efficiencies Board, an internal body established to improve coordination and collaboration across NNSA's sites. According to NNSA officials, 10 matters are under revision or have been changed; two matters were reviewed, but no changes were made; and four matters were reviewed, and M&O contractor input will be considered should the regulation undergo a revision in the future. NNSA's list of matters included DOE directives, federal requirements, and an M&O contract change. According to agency officials, NNSA chose to prioritize its review of certain matters because the agency did not have the resources to review all 91 requirements that M&O contractors identified as burdensome.

NNSA provided technical comments on a draft of this report, which were incorporated as appropriate.

NNSA is responsible for maintaining a safe, secure, and reliable nuclear stockpile and relies on and oversees contractors who manage and operate its laboratory and production sites. NNSA's M&O contracts include requirements for contractors to adhere to laws, regulations, and DOE and NNSA directives. NNSA also has processes to hold contractors accountable for meeting these requirements. Senate Report 115-262, accompanying the John S. McCain National Defense Authorization Act for Fiscal Year 2019, directed NNSA to collect information from its M&O contractors on specific requirements they deemed particularly burdensome and to publish this information in a report.

Senate Report 115-262 also included a provision for GAO to review NNSA's report. GAO's report provides information on (1) a comparison of NNSA's findings with findings reported by external groups, (2) NNSA's approach to collecting and reporting information on requirements the M&O contractors identified as burdensome, and (3) NNSA's actions to address the requirements that the M&O contractors identified.