This report examines 2020 Census innovations designed to save money and boost data quality.

As 2020 activities close, the Census Bureau now expects the census will have cost about $14.2 billion, including $1.1 billion to respond to COVID-19. This is about $96 per household. If this holds, the Bureau will have slowed a cost increase trend. Adjusted for inflation, the cost per household was $80 in 2000 and $92 in 2010.

New devices and automation in the field for the first time helped boost productivity more than expected. The Bureau could do a better job analyzing the effectiveness of and refining these and other measures. We recommended it do so. 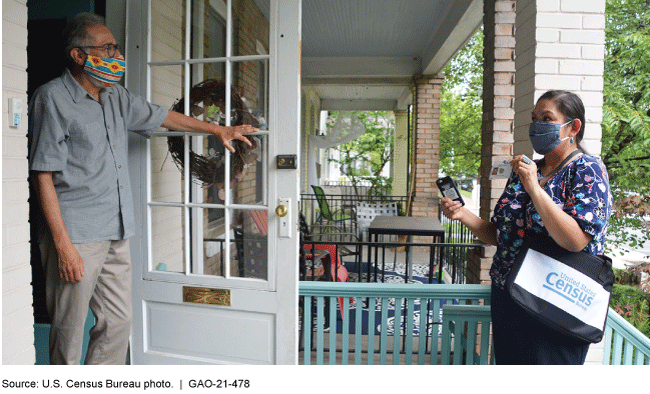 With the decennial census coming to a close, the Bureau expects the 2020 Census to cost roughly $14.2 billion (in nominal year dollars), which is above initial estimates but below the Bureau's most recent estimate of $15.6 billion. This figure includes $1.1 billion that has been spent responding to the unprecedented Coronavirus Disease 2019 (COVID-19) pandemic. If this scenario holds, the Bureau also will have been able to slow the trend in increasingly costly decennials, with 2020 costing roughly $96 per household, compared to $92 for 2010, $80 for 2000, and $45 for 1990 (adjusted for inflation).

The Bureau slowed decennial cost growth but did not position itself to know how much money was saved by each of its planned 2020 innovation areas. Bureau officials told GAO that they did not track the specific innovation areas within their revised cost estimation and budget execution framework and that they focused less on cost savings stemming from the innovation areas as they transitioned to implementing the census. GAO's March 2020 cost estimating and assessment guide, however, notes that a primary purpose of a cost estimate is to help managers evaluate affordability and performance against plans, as well as the selection of alternative solutions. Tracking operational innovations as part of the cost estimation and budget execution framework will help the Bureau to assess the cost effectiveness of future designs.

An expanded range of response modes, the extended self-response window, and a modified outreach strategy helped the Bureau achieve a higher-than-expected 63.4 percent self-response rate by mid-August 2020 amid challenging conditions related to COVID-19. While the Bureau made a late design change in February 2020 to its Internet response system, thereby introducing risk, 50.6 percent of households self-responded to the 2020 Census using the Internet prior to Non-Response Follow-Up – higher than the 41.8 percent that the Bureau had anticipated. The flexibility in response options also created the potential for the Bureau to receive multiple responses across multiple modes from a given household. Receiving more than 17 million responses without a census-issued identifier (compared to the approximately 9 million that the Bureau expected) increased the Bureau's workload to verify the data. For future decennials, researching and testing how design innovations may affect the methodologies and time required for post-data collection processing will help the Bureau manage any risks of delayed delivery of data products.

Improved use of technology aided the productivity of the Bureau's field operations, though using additional measures of productivity results could help the Bureau maximize future gains. Specifically, the use of laptops and smartphones to collect census data in the field for the first time, along with a case routing and assignment capability known as the optimizer, helped the Bureau canvass and enumerate more cases per hour than the Bureau had anticipated. Bureau officials said that they have not yet analyzed any additional measures of the optimizer's success that the Bureau had originally identified, such as miles traveled per case or hours worked per enumerator. Without identifying and reporting on a wider range of measures of effectiveness, the Bureau may miss opportunities to learn how it might further refine optimization efforts to achieve higher productivity in future operations.

For the 2020 Census, the U.S. Census Bureau (Bureau) implemented a series of planned innovations to rein in cost increases that have characterized recent decennial censuses and enhance data quality. For example, the Bureau reengineered the way that it compiled its address list to reduce time spent physically going door-to-door. The Bureau also developed automated tools designed to manage follow-up with nonresponding households more efficiently. Understanding how these innovations performed can help to gauge the cost and quality of the 2020 Census while informing decisions about future censuses.

This report, the second in a series of retrospective reviews of the 2020 Census, examines the extent to which the Bureau's innovations to the 2020 Census helped the Bureau achieve its cost and quality goals. GAO reviewed Bureau planning documentation, interviewed key officials, analyzed preliminary Bureau field production data, and surveyed area census office managers.

GAO is making three recommendations, including that the Bureau track savings from future innovations; research and test any effects of those innovations on data processing timelines; and identify and report on additional measures on the effectiveness of the Bureau's optimization. The Bureau agreed with GAO's findings and recommendations. The Bureau also provided technical comments, which GAO incorporated as appropriate.