The Army is working to modernize its fleet of Tactical Wheeled Vehicles (such as Humvees and heavy equipment transporters). These vehicles transport soldiers and materials like munitions, water, and fuel.

The Army plans to issue a new fleet strategy in 2022, but hasn't accounted for how its ongoing initiatives, like research on ion batteries to electrify the fleet—could affect this strategy. The Army relies on industry to develop and produce these vehicles, but does not always effectively communicate its needs to companies.

We recommended that the Army routinely update its strategy and improve communication with industry. 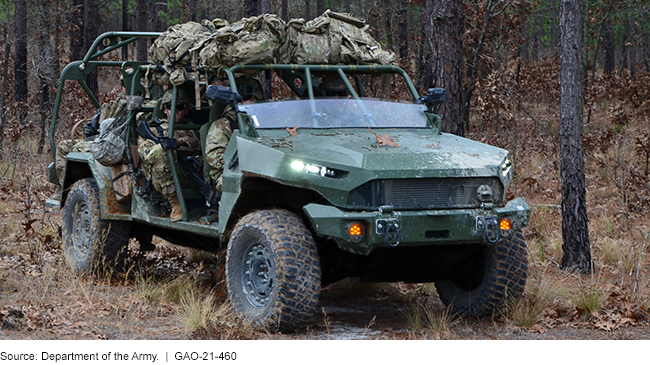 The Army is currently studying ways to modernize its fleet of tactical wheeled vehicles (TWV). TWVs range from light utility vehicles, such as Humvees, to heavy equipment transporters, and support a variety of combat operations by transporting soldiers and materiel such as munitions, water, and fuel.

The Army expects to issue a new TWV Strategy in 2022. Central to informing the TWV Strategy is a TWV study, set to issue in July 2021, which is to identify the capabilities and requirements needed for TWVs to support the strategy. There are, however, other more narrowly focused initiatives that also could influence planning for the TWV fleet (see figure).

According to Army officials, there is no Army directive, policy, or guidance to update the strategy beyond what is expected to be issued in 2022. If, however, the Army does not routinely update the TWV strategy to consider information that is developed over time from other initiatives, the service risks using outdated and incomplete information to manage its fleet of TWVs.

Analyses from the Departments of Defense (DOD) and Army—as well as analysis conducted by GAO for this review—indicate that the Army could expand the current industrial base for TWVs. This is due in part to a healthy commercial truck market. According to trade association and company representatives, however, there are several challenges that deter commercial companies from participating in the defense market, including inconsistent communication from the Army. For example, industry officials noted that, in the past, the Army has communicated the need for improved capabilities, which causes the companies to then expend their own funds. When the Army chose not to pursue these capabilities, the companies then lost their investment and thus were less likely to be involved in future efforts. Without taking steps to improve its communication with industry, the Army could miss opportunities to increase companies' participation in TWV modernization efforts, facilitate competition, and benefit the taxpayer and the warfighter.

Due to an increase in near-peer competition from Russia and China, the Army recently changed its operational focus. With this change in focus, the Army is currently studying ways to modernize its TWV fleet. This modernization relies, in part, on a viable industrial base with multiple companies that can compete to deliver the capabilities needed by the warfighter at an affordable price.

The House and Senate Armed Services Committee reports accompanying the National Defense Authorization Act for Fiscal Year 2021 included provisions for GAO to assess the Army's new TWV strategy and implementation efforts. This report assesses, among other things, the Army's progress in identifying specific capabilities and requirements for its 2022 TWV Strategy and the extent to which opportunities exist for expanding the TWV industrial base.

GAO is recommending that the Army routinely update its TWV Strategy to account for evolving information and circumstances, and that it improve communication with industry. The Army concurred with both recommendations.