Military installations rely on nearby communities for commodities and infrastructure, such as electricity, access roads, and telecommunications.

To help protect its installations from the effects of climate change and extreme weather, DOD coordinates with communities to improve infrastructure resilience. Three DOD grant programs help fund studies and improvements. For example, DOD helped fund a study that led one community to elevate a road leading to a base in a flood-prone area.

DOD doesn't currently measure whether its grant programs are achieving their intended objectives. We recommended DOD establish performance measures for the programs.

Damage to a Rail Line at Marine Corps Base Camp Lejeune, North Carolina, Caused by Hurricane Florence in 2018 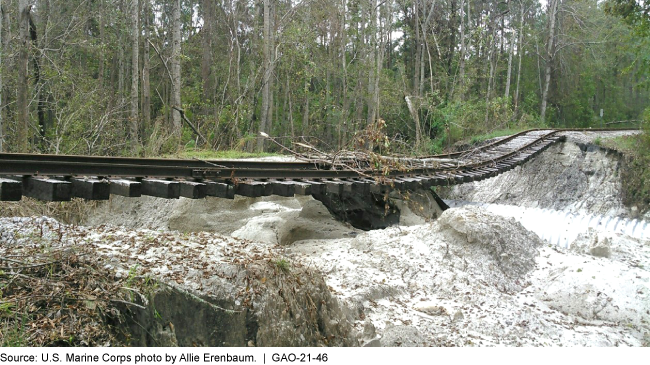 Department of Defense (DOD) domestic installations report extensive and varied use of community infrastructure and support services—such as roads, bridges, electricity, water, and medical facilities—that are vulnerable to disruptions from climate change and extreme weather. For example, 62 of the 63 installations (98 percent) that responded to GAO's survey report relying on communities for electricity, access roads or bridges, and telecommunications.

Note: CUP studies result in recommendations that address threats to installation readiness; MIR studies identify risks to infrastructure outside an installation; and DCIP provides construction funds to communities to address, among other things, deficiencies in community infrastructure that support military installation resilience.

DOD administers three grant programs that support community coordination with local installations on climate change and extreme weather—the longstanding Compatible Use Plan (CUP), and the Military Installation Resilience (MIR) and Defense Community Infrastructure Pilot (DCIP) programs established in fiscal year 2020. DOD and community officials emphasized the value of these grant programs as a means of facilitating and funding coordination with surrounding communities, including through joint land use studies and community infrastructure development. In fiscal year 2020, about $67 million was awarded under the three grant programs.

While DOD monitors the status of individual CUP grant expenditures and deliverables—and plans to similarly monitor its MIR and DCIP grants—it is unable to determine the effectiveness of the grant programs. Specifically, DOD has not developed performance measures to benchmark and to track overall program performance. Without establishing performance measures for these grant programs, DOD and Congress are limited in determining whether desired outcomes are being achieved and whether current and future investments in the grant programs are delivering their intended value.

DOD manages a domestic real-estate portfolio with an estimated replacement value of nearly $930 billion. DOD has acknowledged climate change and extreme weather as threats to its installations, operations, and readiness; and has noted the importance of coordinating with state and local governments to improve climate change preparedness and resilience.