Nearly 700 military installations have had a known or suspected release of PFAS—chemicals found in firefighting foam that can have adverse effects on human health. DOD is in the early phases of environmental investigations at these locations. DOD has also acted in some cases to address PFAS-contaminated drinking water, such as by providing bottled water and installing treatment systems.

DOD estimates that future PFAS costs will total at least $2.1 billion (and likely much more), but it has not reported these estimates to Congress.

We recommended that DOD include future PFAS cost estimates in its annual environmental report to Congress. 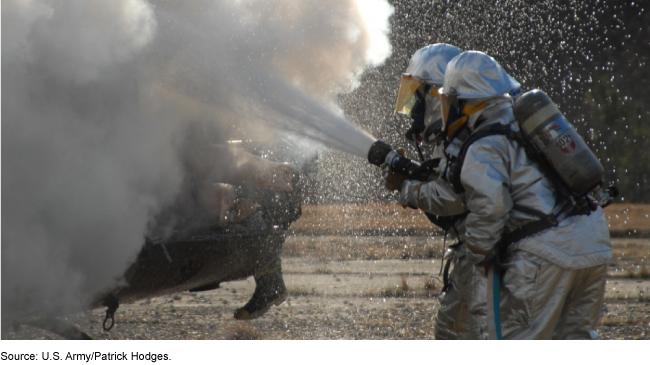 The Department of Defense (DOD) is early in the environmental restoration process at or near the 687 installations with a known or suspected release of certain per- and polyfluoroalkyl substances (PFAS)—heat-resistant chemicals found in certain firefighting foams that can contaminate drinking water (see fig.).

DOD Installations in the Environmental Restoration Process with a Known or Suspected PFAS Release, as of Fiscal Year 2020

aAccording to DOD officials, in fiscal year 2021 the Air Force changed its definition for when this phase is considered complete, resulting in a lower number of DOD installations (129 installations) that had completed this phase as of March 2021.

DOD has taken actions (e.g., providing bottled water, installing water treatment systems) to address PFAS in drinking water at or near its installations when PFAS amounts exceeded federal health advisory levels. DOD generally has not taken actions to address PFAS in drinking water where PFAS amounts were below the federal advisory levels, but above state PFAS standards.

DOD estimates that its future PFAS investigation and cleanup costs will total more than $2.1 billion beginning in fiscal year 2021, which is in addition to $1.1 billion in actual PFAS costs incurred through fiscal year 2020. These costs will likely increase significantly, because DOD is still in the early phases of its PFAS investigation. DOD officials also cited regulatory uncertainty at the federal and state levels as a significant challenge in estimating PFAS environmental restoration costs. However, DOD has not reported future PFAS cost estimates, or the scope and limitations of those estimates, in its annual environmental reports to Congress. By reporting this information to Congress, DOD would ensure that Congress has increased visibility into the significant costs and efforts associated with PFAS investigation and cleanup at or near military installations.

As of March 2021, DOD had identified six potential PFAS-free foam candidates; however, PFAS-free foams have been unable to fully meet DOD's current performance requirements. By law, DOD must ensure that a PFAS-free firefighting alternative is available for use at its installations by October 2023. DOD is funding research to address challenges associated with identifying PFAS-free alternatives. DOD plans to continue using PFAS-containing foam aboard ships at sea—as allowed for by the National Defense Authorization Act for Fiscal Year 2020—until a PFAS-free alternative can meet existing requirements.

DOD has long used PFAS-containing firefighting foam to extinguish fires quickly and keep them from reigniting. PFAS can migrate into the environment (e.g., drinking water) and may have adverse effects on human health. The federal government has issued two nonenforceable advisories but has not yet regulated PFAS in drinking water; some states have adopted PFAS regulations.

Conference Report 116-333, accompanying the National Defense Authorization Act for Fiscal Year 2020, included a provision for GAO to review DOD's response to PFAS contamination. This report (1) describes DOD's progress in the investigation and cleanup of PFAS at its installations, and DOD's actions to address PFAS in drinking water; (2) describes DOD's actual and estimated costs for PFAS investigation and cleanup, and evaluates the extent to which DOD has reported those figures to Congress; and (3) describes DOD's progress in identifying PFAS-free firefighting alternatives.

GAO recommends that DOD annually include cost estimates for future PFAS investigation and cleanup—including their scope and any limitations—in the environmental report to Congress. DOD concurred with the recommendation.