When an Army unit is called into the field, about two-thirds of its equipment moves to a shipping port by rail, Army officials said.

The Army cut its rail operating force by 70% after a 2015 Army analysis concluded that it didn't need its own crews and could rely on civilians. However, the remaining crews have been in high demand and Army officials said it is unclear what would happen in a large mobilization.

Also, about half the tracks under Army control have been closed due to defects, inspectors said. The Army doesn't have an overall program to assure tracks are inspected and deficiencies corrected. 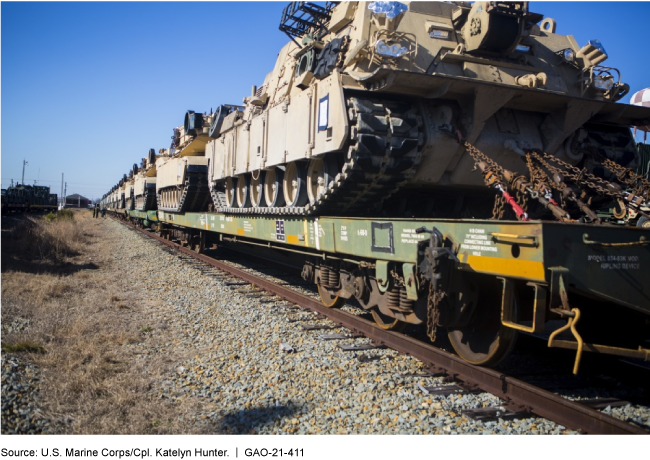 The Army has taken some actions to provide rail operating crews, but has not determined requirements for the number of trained rail operating crews needed. Based on a 2015 analysis, the Army reduced its rail force structure by 70 percent to a single 180-person 757th Expeditionary Rail Center (ERC). As the Army's only rail unit, it provides railroad personnel to assess, plan, coordinate, and conduct rail operations to support the warfighter overseas. Although not part of its mission, the 757th ERC also provides rail operating crews to support the rail movement of Army units in the continental U.S. (CONUS) as a stopgap measure. Officials stated that, since fiscal year 2018, the 757th ERC operated under an exception allowing them to support CONUS operations, and that the demand for these crews in CONUS occurred frequently and regularly. Army officials stated that a possible gap could exist in the event of a large mobilization as the unit would be dedicated to its overseas effort and may also be called to support CONUS movements. A 2020 Army study considered whether rail assets, such as the number of trains, could meet requirements, but officials stated that it did not determine the number of rail operating crews needed to support a large mobilization. Determining this requirement and the risk associated with any shortfall of crews would better position DOD to mitigate those risks.

The Army has undertaken efforts to manage the condition of its rail track, but challenges remain in conducting inspections, using waivers, and funding repairs. For example, Army inspectors characterized about half of the Army's rail track as closed due to defects, and four of 60 installations had not met or were not scheduled to meet the 5-year ultrasonic inspection timeline standard set by the Army inspection program. Although the Army has some quality assurance efforts, it has not established an overall quality assurance program to ensure that its track is inspected and that deficiencies are corrected according to existing protocols. Without a quality assurance program, the Army will not have a comprehensive approach for its rail track and will not have coordinated oversight in managing efforts such as inspections and funding repairs.

According to Army officials and doctrine, rail is the most cost effective and expeditious means of moving large quantities of materiel, such as tanks and ammunition, over long distances. Army officials also stated that during contingencies, approximately 67 percent of Army unit equipment moves by rail from its fort or base of origin to a shipping port.

House Report 116-120, accompanying a bill for the National Defense Authorization Act for Fiscal Year 2020, included a provision for GAO to review military rail capabilities. GAO evaluated the extent to which the Army has taken action to 1) meet potential needs for rail operating crews and 2) inspect, repair, and monitor installations' rail track.

GAO reviewed Army studies, documents, and analyses about rail operating crew needs and the management and oversight of the Army's rail track network, and interviewed Army and other appropriate DOD officials.

GAO is making three recommendations to the Army to determine the requirement for trained rail operating crews, quantify the risk of any shortfall of crews, and require and implement a quality assurance program to inform decision-making in providing oversight of rail track conditions. The department concurred with GAO's recommendations.