The James Webb Space Telescope is the planned successor to the Hubble Telescope. The cost of the telescope has nearly doubled—to $9.7 billion—since 2009. Its launch, now planned for October 2021, has been delayed over 7 years.

NASA is working to complete the telescope. Activities like strengthening the telescope’s sunshield took longer than expected, cutting into the project’s schedule reserves, i.e., the extra time NASA set aside to account for unforeseen problems. As a result, NASA has less reserve than planned to complete remaining activities.

In March, NASA reported that a launch vehicle issue is likely to cause a further launch delay. 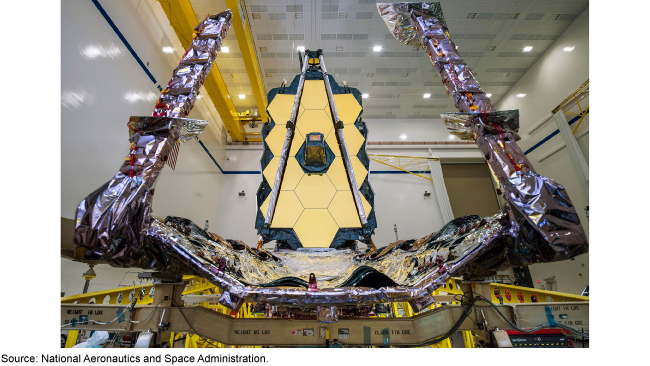 Since 2019, the National Aeronautics and Space Administration's (NASA) James Webb Space Telescope (JWST) project, one of the agency's most complex science missions, has made considerable progress toward launch—now planned for October 2021—by resolving technical issues, but some schedule and cost challenges remain. For example, in March 2021, NASA officials reported that launch vehicle anomalies that the project's international partners need to resolve will likely lead to a further delay to the launch date. The project has also used schedule reserves—extra time set aside to accommodate unforeseen risks or delays—faster than expected to address issues such as repairing and strengthening the sunshield. As a result, the project has less schedule reserve than planned to complete remaining activities. The project is also completing redesigns for key parts of the observatory, including actuators, which help unfurl the sunshield. Further, the project continues to address technical problems that could affect the project's ability to meet cost commitments if the contractor workforce is needed longer than planned.

Key Activities Remaining, and Planned vs. Actual Use of Schedule Reserves 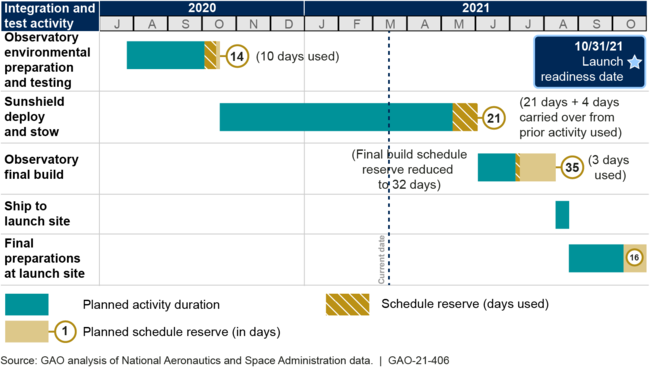 Including the launch delay risk, the project is managing 39 risks—11 fewer than when GAO reported in January 2020. The project reduced the number of known mission risks, but expects to continue managing risk after launch to complete mission objectives. Of the 39 risks, NASA will continue to manage 26 after launch, including those related to sunshield deployment and the functionality of the observatory's sensitive, near-infrared camera. Some of these risks could result in loss of mission, but NASA assessed that they are unlikely to occur. The JWST project established a commissioning organization in part to mitigate risks. For example, the team developed 207 contingency plans to address a variety of issues that may be faced during observatory launch, commissioning, and operation.

JWST, a large, deployable telescope, is one of NASA's most complex projects and top priorities. It is the scientific successor to the Hubble Space Telescope and is intended to help scientists better understand how galaxies and the universe have evolved and study planets in other solar systems. Problems discovered during integration and testing caused multiple delays that led NASA to replan the project in June 2018. Now estimated to cost $9.7 billion, the project's costs have nearly doubled and its launch date has been delayed by over 7 years since its cost and schedule baseline was established in 2009.

Conference Report No. 112-284 included a provision for GAO to assess the project annually and report on its progress. This, GAO's ninth related report, assesses (1) the extent to which technical issues and other challenges affected progress against cost and schedule commitments since 2019 and (2) how the JWST project managed known risks to completing its mission. To conduct this work, GAO reviewed relevant NASA policies, analyzed NASA and contractor data, and interviewed NASA and contractor officials.

GAO is not making any new recommendations. Over eight previous reports, GAO has made several recommendations to NASA on the management of this project. NASA completed efforts to address those that remained relevant in 2019. We provided NASA with a draft of this report for review. The agency told us it had no comments.