Hypersonic weapons fly at least 5 times the speed of sound, have unpredictable flight paths, and are expected to be very difficult to defend against.

The Department of Defense is developing hypersonic weapons and technologies with support from other agencies. These projects are expected to cost almost $15 billion from FYs 2015-2024.

NASA and the Department of Energy have agreements with DOD on their supporting roles in developing the technology. Within DOD, development efforts are ongoing at dozens of organizations. To ensure coordinated leadership, we recommended that DOD better define and document roles and responsibilities for these efforts. 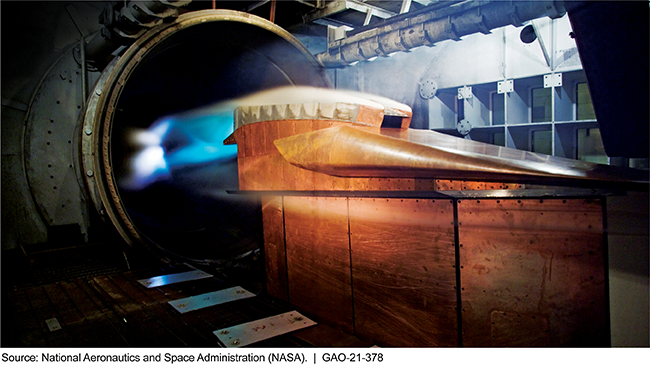 GAO identified 70 efforts to develop hypersonic weapons and related technologies that are estimated to cost almost $15 billion from fiscal years 2015 through 2024 (see figure). These efforts are widespread across the Department of Defense (DOD) in collaboration with the Department of Energy (DOE) and, in the case of hypersonic technology development, the National Aeronautics and Space Administration (NASA). DOD accounts for nearly all of this amount.

Hypersonic Weapon-related and Technology Development Total Reported Funding by Type of Effort from Fiscal Years 2015 through 2024, in Billions of Then-Year Dollars

The majority of this funding is for product development and potential fielding of prototype offensive hypersonic weapons. Additionally, it includes substantial investments in developing technologies for next generation hypersonic weapons and a smaller proportion aimed at countering hypersonic threats.

Hypersonic weapon systems are technically complex, and DOD has taken several steps to mitigate some of the challenges to developing them. For example, DOD has attempted to address challenges posed by immature technologies and aggressive schedules by pursuing multiple potential technological solutions so that it has options. Other challenges DOD is addressing relate to industrial base and human capital workforce investments needed to support large-scale production and the availability of wind tunnels and open-air flight test ranges needed to test hypersonic weapons.

DOE and NASA have agreements with DOD on supporting roles, but DOD itself has not documented the roles, responsibilities, and authorities of the multitude of its organizations, including the military services, that are working on hypersonic weapon development. Such governing documentation would provide for a level of continuity when leadership and organizational priorities inevitably change, especially as hypersonic weapon development efforts are expected to continue over at least the next decade. Without clear leadership roles, responsibilities, and authorities, DOD is at risk of impeding its progress toward delivering hypersonic weapon capabilities and opening up the potential for conflict and wasted resources as decisions over larger investments are made in the future.

Hypersonic missiles, which are an important part of building hypersonic weapon systems, move at least five times the speed of sound, have unpredictable flight paths, and are expected to be capable of evading today's defensive systems. DOD has begun multiple efforts to develop offensive hypersonic weapons as well as technologies to improve its ability to track and defend against them. NASA and DOE are also conducting research into hypersonic technologies. The investments for these efforts are significant.

This report identifies: (1) U.S. government efforts to develop hypersonic systems that are underway and their costs, (2) challenges these efforts face and what is being done to address them, and (3) the extent to which the U.S. government is effectively coordinating these efforts. This is a public version of a sensitive report that GAO issued in January 2021. Information that DOD deemed to be sensitive has been omitted.

The Secretary of Defense should define and document the roles, responsibilities, and authorities of the leadership positions and organizations in DOD responsible for the development and acquisition of hypersonic weapons. DOD concurred with the recommendation.

The Department of Defense (DOD) is working to develop hypersonic weapons—which are capable of moving...
Blog Post