The Navy issued a policy in 2017 for managing fatigue after finding that it was a contributing factor in fatal ship collisions earlier that year. But the Navy has inconsistently implemented that policy and only 14% of officers are getting adequate sleep.

In addition, the Navy routinely assigns fewer crewmembers to ships than its workload studies have determined are needed to safely operate them.

We also found that the Navy has not accounted for the time that sailors will be expected to spend on modernized training when it is delivered, which may exacerbate sailor overwork and fatigue.

Our 8 recommendations address these and other related issues. 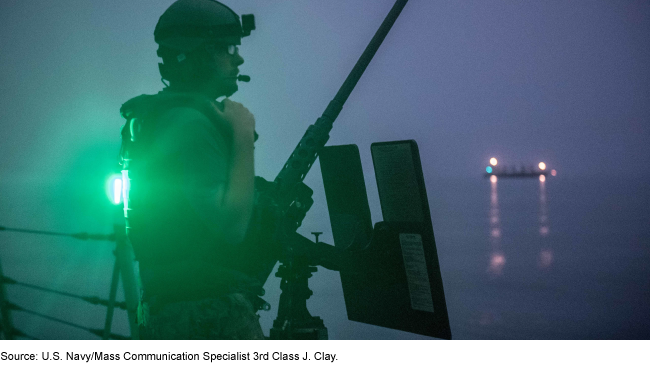 The Navy issued a fatigue management policy in 2017, but has inconsistently implemented it and sailors are not receiving adequate sleep. GAO conducted a survey in 2020 and estimates that 14 percent of officers received the then recommended 7 hours or more of sleep a day during their most recent deployment, while 67 percent received 5 hours or less. Navy data show that sailor effectiveness declines after prolonged periods without sleep, equating to impairment levels comparable to intoxication. The Navy updated its policy in December 2020—directing adherence to fatigue guidelines—and is taking steps to improve implementation, but is limited by a lack of quality information on sailor fatigue and the factors that cause lack of sleep. Without this information, the Navy cannot effectively manage fatigue to ensure crews operate ships safely.

The Navy routinely assigns fewer crewmembers to its ships than its workload studies have determined are needed to safely operate them. Until recently, the Navy tracked and internally reported its crewing against the number of funded positions rather than against required positions, a practice which understated crewing shortfalls (see fig.). As a result, the Navy did not accurately measure the full extent of shortfalls, which almost doubled on average from 8 percent in October 2016 to 15 percent in September 2020. Although the Navy began tracking required positions in February 2021, this practice is not reflected in guidance. The Navy also uses funded positions, rather than requirements, to project its future personnel needs. Therefore, it is not accurately communicating to internal decisionmakers the number of personnel it will need as the fleet grows, which may prevent it from effectively mitigating current crewing shortfalls.

The Ready Relevant Learning (RRL) initiative is intended to improve sailor performance, and the Navy has several ongoing and planned measures to assess its effectiveness. However, delivering modernized training will require significant upgrades to the Navy's information technology infrastructure, for which it has only recently begun planning. In addition, the Navy has not accounted for the time that sailors will be expected to spend on modernized training when it is fielded, which may exacerbate sailor overwork and fatigue.

Following two Navy ship collisions in 2017, the Navy found that sailor overwork, fatigue, and training deficiencies contributed to the accidents, and has taken steps to address these issues.

House Report 116-120, accompanying a bill for the National Defense Authorization Act for Fiscal Year 2020, includes a provision for GAO to assess the Navy's management of surface ship sailor fatigue, crewing, and the RRL initiative. This report examines the extent to which the Navy has (1) implemented its fatigue management policy, (2) assigned sufficient crewmembers to its surface ships and tracked crew levels, (3) forecasted its personnel needs as the fleet size grows, and (4) implemented RRL training and measured its effectiveness.

GAO is making eight recommendations to the Navy that, among other things, it revise its guidance and practices to measure sailor fatigue and address the factors causing fatigue, use required positions when reporting crew sizes and projecting personnel needs, and factor training time into sailor workload. DOD concurred with our recommendations.