COVID-19 delayed some field data collection for the 2020 Census. Yet, the Bureau was able to meet its mid-October deadline for following up with more than 99% of households that hadn't responded.

Some challenges to operations included:

Natural disasters and other access problems in some local areas—e.g., hurricanes that hit Louisiana

We recommended that the Bureau evaluate lessons learned from the 2020 Census data collection and incorporate them into 2030 Census planning. 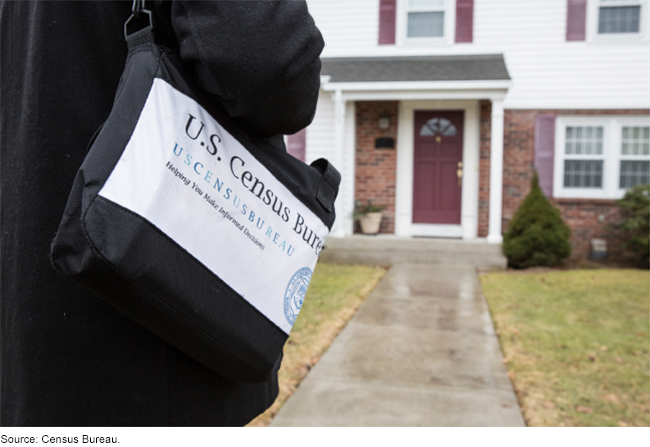 In March 2020, the Census Bureau (Bureau) delayed the start of field data collection because of COVID-19 safety, and then revised several operational timelines in response to the pandemic and Department of Commerce (Commerce) decisions. Nationally the Bureau reported completing more than 99 percent of nonresponse follow-up cases (households that have not responded to the census) by October 15, 2020. The Bureau attributes the use of technology as among the reasons it completed the work by this date.

The Bureau, however, had lower completion percentages ranging between 94 and 99 for 10 local geographic areas, in part because of natural disasters and COVID-19. For example, according to the Bureau, in Shreveport, Louisiana, short-term closures stemming from the hurricane impacted data collection for 82,863 housing units. As a mitigation strategy, the Bureau shifted the Shreveport operation to telephone enumeration and brought in more than 1,200 enumerators from travel teams. Despite these efforts, the Bureau was unable to complete 22,588 cases in Shreveport before data collection ended. For these cases the Bureau will need to rely on alternate methods including imputation, which draws data from similar nearby households to determine whether a housing unit exists, whether it is occupied, and, if so, by how many people.

In addition to the challenges brought on by natural disasters, the Bureau encountered other difficulties during nonresponse follow-up, such as, the inability of supervisors to reassign open cases in a timely fashion. GAO found that census field supervisors did not have the authority to reassign cases and had to wait for the field manager to make those reassignments. Bureau officials told GAO it would consider the reassignment of cases as it moves towards planning for the 2030 Census.

To monitor nonresponse follow-up, the Bureau used quality control procedures, such as real-time monitoring of enumerator activities by supervisors and training assessments. However, GAO found the Bureau did not have proper controls in place, allowing some enumerators to work without having passed the required training assessment. The Bureau agreed that additional controls were necessary.

The Bureau planned to count individuals living in group quarters, such as skilled-nursing and correctional facilities, between April 2, 2020, and June 5, 2020, but revised those dates to July 1, 2020, through September 3, 2020. The pandemic made it difficult to count group quarters. For example, Bureau staff found it challenging to locate a point of contact at some group quarters because facilities were closed due to the pandemic. Bureau officials told us that in December 2020 they decided to re-contact more than 24,000 out of approximately 272,000 group quarter facilities to collect data, and that imputation would be used to count individuals at the remaining facilities still reporting a zero population count.

The Bureau is updating plans to assess operations and identify resulting lessons learned from the 2020 Census. As part of its planning for 2030, it will be important for the Bureau to assess the impact of the 2020 late design changes and the operations' challenges that arose.

The 2020 Census was conducted under extraordinary circumstances. In response to the COVID-19 pandemic and related Commerce decisions, the Bureau made a series of late changes to the design of the census. As GAO previously reported, these changes introduced risks to the quality of data that the Bureau provides for congressional apportionment and redistricting purposes.

GAO was asked to review the Bureau's implementation of the 2020 Census. This report assesses the Bureau's implementation of the: (1) nonresponse follow-up operation, (2) group quarters enumeration, and (3) plans to assess those operations. To address these objectives, GAO conducted a series of surveys of all 248 census offices during the collection of data for those operations. GAO also monitored the cost and progress of operations and interviewed census field supervisors for each operation.

GAO is recommending that the Bureau inform 2030 Census planning by evaluating the effects of major operational changes made during data collection and challenges encountered for nonresponse follow-up and group quarters enumerations. In its comments, the Department of Commerce agreed with GAO's findings and recommendation. The Bureau also provided technical comments, which GAO incorporated as appropriate.