The U.S. military services preposition their assets—including combat vehicles, rations, medical supplies, and repair parts—on land and on the water at strategic locations around the world. The Department of Defense uses these assets for combat, to support allies, and for disaster and humanitarian assistance.

DOD does not have a complete picture of the services' prepositioning programs. Improved joint oversight would allow DOD to better identify shortfalls, redundancies, and more.

Our recommendation addresses this issue. 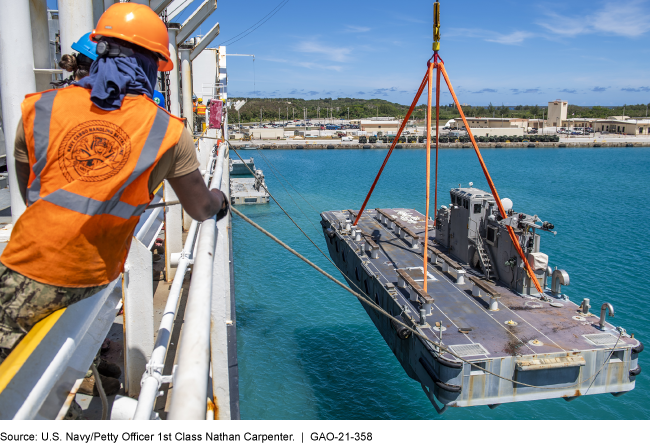 The services preposition combat and support assets ashore and afloat worldwide, including in the Indo-Pacific region. Prepositioned assets include combat vehicles, equipment sets for engineering and construction, and protective gear for chemical or biological attacks. During the COVID-19 pandemic, the Department of Defense (DOD) used prepositioned medical assets for personnel in Guam, South Korea, and Germany. All of the services have reported some shortfalls in their prepositioned assets from 2015 through 2019—including mortars, combat vehicles, and medical equipment. In the Indo-Pacific region, for example, the Army reported shortfalls in equipment to construct bridges over difficult terrain. All services also cited challenges, such as insufficient storage space, storage facilities located far away from intended points of use, and the perishability of some assets. In some cases, the services are taking actions to address these shortfalls and challenges. In others, the services are accepting risk because, according to officials, not all shortfalls and challenges can be fully addressed.

The U.S. military services preposition critical assets at strategic locations around the world for access during the initial phases of an operation. DOD uses these prepositioned assets for combat, support to allies, and disaster and humanitarian assistance. For many years, GAO has identified weaknesses in DOD's efforts to establish a joint oversight framework to guide its ability to assess the services' prepositioning programs. This has led to fragmentation and the potential for duplication.

This is a public version of a sensitive report that GAO issued in December 2020. Information that DOD deemed sensitive has been omitted.

GAO recommends that DOD develop a reporting mechanism or tool to gather complete information about the military services' prepositioning programs for joint oversight and to reduce duplication and fragmentation. DOD concurred with the recommendation.