When the COVID-19 pandemic began, the U.S. repatriated about 1,100 U.S. citizens from abroad and quarantined them domestically to prevent the spread of the virus.

But coordination and safety issues among Department of Health and Human Services' personnel put repatriates, HHS personnel, and nearby communities at risk. HHS agencies didn't follow plans delineating their roles for repatriations during a pandemic. For example, there was confusion about which agency was in charge of health and safety protocols at the first quarantine site.

We recommended that HHS revise or develop and test repatriation response plans to clarify agency roles.

Department of State personnel aboard the first repatriation flight out of Wuhan, China, in January 2020. 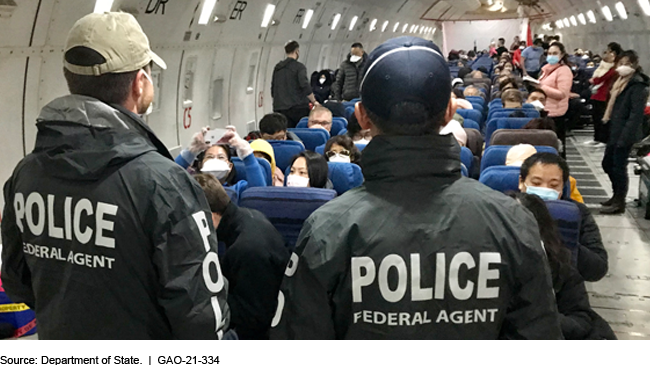 At the beginning of the COVID-19 pandemic, the U.S. returned, or repatriated, about 1,100 U.S. citizens from abroad and quarantined them domestically to prevent the spread of COVID-19. The Department of Health and Human Services (HHS) experienced coordination and safety issues that put repatriates, HHS personnel, and nearby communities at risk. This occurred because HHS component agencies—the Administration for Children and Families, the Office of the Assistant Secretary for Preparedness and Response, and the Centers for Disease Control and Prevention—did not follow plans or guidance delineating their roles and responsibilities for repatriating individuals during a pandemic—an event these agencies had never experienced. While they had general repatriation plans, there was disagreement as to whether the effort was in fact a repatriation. This led to fundamental problems for HHS agencies and their federal partners, including at the March Air Reserve Base quarantine facility in California where the first repatriated individuals were quarantined prior to widespread transmission of COVID-19 in the U.S. These problems included the following:

The National Response Framework, a guide to how the U.S. responds to disasters and emergencies, instructs agencies to understand their respective roles and responsibilities, know what plans apply, and develop appropriate guidance for emergency responses. Until HHS revises or develops new plans that clarify agency roles and responsibilities during a repatriation in response to a pandemic, it will be unable to prevent the coordination and health and safety issues it experienced during the COVID-19 repatriation response in future pandemic emergencies.

HHS also did not include repatriation in its pandemic planning exercises. As a result, agencies lacked experience deploying together to test repatriation plans during a pandemic, which contributed to serious coordination issues. GAO has previously reported that exercises play an important role in preparing for an incident by providing opportunities to test response plans and assess the clarity of roles and responsibilities. Until HHS conducts such exercises, it will be unable to test its repatriation plans during a pandemic and identify areas for improvement.

HHS provides temporary assistance to U.S. citizens repatriated by the Department of State (State) from a foreign country because of destitution, illness, threat of war, or similar crises through the U.S. Repatriation Program. In January and February 2020, HHS assisted State in repatriating individuals from Wuhan, China, and the Diamond Princess cruise ship in Yokohama, Japan, to the U.S. HHS quarantined repatriates at five Department of Defense (DOD) installations to ensure they did not infect others with COVID-19.

GAO is making two recommendations to the Secretary of Health and Human Services: (1) revise or develop new emergency repatriation response plans to clarify agency roles and responsibilities during a pandemic; and (2) plan and conduct repatriation exercises with relevant stakeholders—including federal partners and state, local, and territorial governments—to test repatriation plans in response to a pandemic. HHS agreed with our recommendations.