The Office of the Under Secretary of Defense for Intelligence and Security was created after 9/11 to serve as an intelligence focal point and to oversee DOD intelligence and security activities. Since 2017, the office has gained new responsibilities and made organizational changes to accommodate them.

The office hasn't set clear expectations for its oversight mission. For example, it hasn't clarified roles or responsibilities for the various entities involved in oversight—risking confusion or duplicative work. It also doesn't have enough tools to measure progress.

Our recommendations address these and other issues we found. 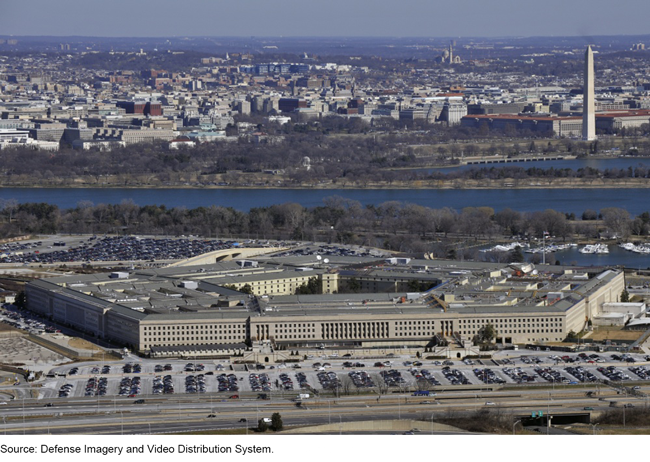 The Office of the Under Secretary of Defense for Intelligence and Security (the office) gained new responsibilities from 2017 through 2020—including in the areas of artificial intelligence, law enforcement, personnel vetting, and identity intelligence—and made structural changes within its organization. For example, in 2018, it assumed new responsibilities to oversee and to manage defense law enforcement authorities, training, and standards, in part to consolidate all authorities and capabilities for security-related missions into the office. It has also made internal organizational changes in its directorates, in part to better align its dual intelligence and security missions under its Directors for Defense Intelligence. The office's workforce is composed of largely non-permanent personnel to fulfill its responsibilities. According to GAO's analysis, as of July 2020, 78 percent of the office's workforce across the four directorates were non-permanent personnel—consisting of contractors, joint duty assignees, military/reservists, and liaison officers or detailees (see fig.).

The Office of the Under Secretary of Defense for Intelligence and Security's Workforce Composition by Employee Type across the Four Intelligence Directorates, July 2020

However, the office has experienced challenges in its enterprise oversight, including governance bodies not operating as intended and unclear roles and responsibilities. For example, GAO found that one mission area governance body had not met for several years and that the office had not established clear objectives for such bodies. In another area, Department of Defense (DOD) policy for open source intelligence designates an agency as the lead component and defines the term, but DOD does not outline the extent of the lead component's authority. These challenges exist in part because the office has not established clear expectations for oversight, including refining business rules for governance bodies and clarifying key terms critical to oversight. This has resulted in a lack of clarity around authorities and decision-making.

The office is not well-postured to assess the effectiveness of the intelligence and security enterprises in part because it has not developed tools to enhance accountability, such as goals, desired outcomes, and performance metrics. Without taking further actions, the office cannot fully assess the extent to which the enterprises are meeting the objectives of the 2018 National Defense Strategy and the 2020 Defense Intelligence Strategy.

DOD's Defense Intelligence Enterprise and Defense Security Enterprise play a vital role in supporting DOD's operations and priorities. The Under Secretary of Defense for Intelligence and Security and its corresponding office oversee these enterprises. The roles and responsibilities of the office have grown in recent years, particularly in the area of security.

Committee reports accompanying the National Defense Authorization Act for Fiscal Year 2020 and Intelligence Authorization Act for Fiscal Years 2018, 2019, and 2020 included provisions for GAO to assess the office. GAO's report (1) describes how the office's responsibilities and organization have evolved, and the composition of its workforce, and (2) evaluates how the office conducts oversight and the extent to which it is able to assess the effectiveness of the enterprises.

GAO recommends that the Under Secretary of Defense for Intelligence and Security establish clear oversight expectations and develop and use tools that enhance accountability for specific mission areas. DOD concurred with GAO's recommendations.