Remdesivir was the first drug approved by the Food and Drug Administration to treat COVID-19. Gilead Sciences, Inc., originally developed it to treat other viral diseases.

We reviewed federal contributions to development of remdesivir and related agency patent rights.

As of Dec. 2020, federal funding for preclinical studies and clinical trials involving remdesivir totaled about $162 million.

The federal contributions did not result in government patent rights because federally-supported research did not generate new inventions, agency officials told us. 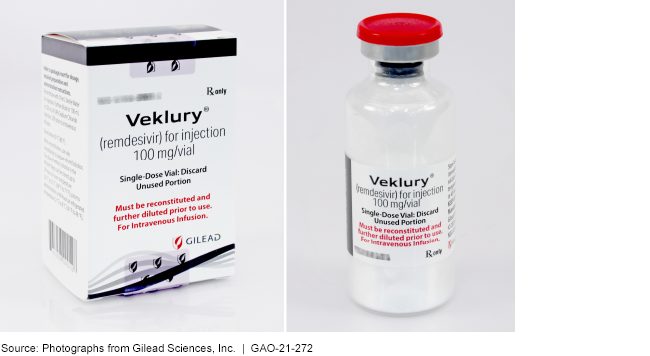 Between 2013 and 2020, the Centers for Disease Control and Prevention (CDC), the Department of Defense (DOD), and the National Institutes of Health (NIH) conducted and funded preclinical research collaborations with Gilead Sciences, Inc. (Gilead) that helped to demonstrate remdesivir's antiviral properties against multiple viruses. NIH also funded three clinical trials. (See figure for examples of federal support.) Between 2009 and 2013, Gilead had synthesized the remdesivir compound, conducted and funded preclinical research that first identified and confirmed the antiviral activity of remdesivir and its parent compound against coronaviruses and other viruses, and had begun patenting the compounds. As of December 2020, federal funding for preclinical studies and clinical trials involving remdesivir totaled about $162 million, as follows:

$11.9 million for preclinical research conducted by NIH and NIH-funded universities; and

Figure: Examples of Federal Involvement in the Development of Remdesivir, 2013-2020

Federally supported remdesivir research conducted by CDC, DOD, NIH, and NIH-funded universities has not resulted in government patent rights, because, according to agency and university officials, federal contributions to the research did not generate new inventions. In addition, Gilead entered research collaborations with federal agencies and universities with a portfolio of existing patents and patent applications, including for the remdesivir compound, which would have left little room for the agencies to generate their own patents. For example, DOD officials told us that when DOD scientists performed antiviral testing of remdesivir against Ebola virus, they used standard tests and screening methods and did not come up with new tests or methods.

Remdesivir is an antiviral drug patented and manufactured by Gilead. Along with its parent compound, remdesivir was originally developed to treat viral hepatitis and a viral respiratory infection. Remdesivir was later studied for antiviral activity against multiple viruses. It was the first drug approved by the FDA to treat COVID-19. Public interest organizations have raised questions about the extent of federal support for the development of remdesivir.

Federal support can benefit the public by creating new inventions and may result in certain intellectual property rights, including patents, for the federal government. Multiple federal agencies support biomedical research and development, which can directly or indirectly contribute to the development of new drugs like remdesivir. These federal agencies include NIH—the largest public funder of biomedical research in the world—as well as CDC and DOD.

GAO was asked to review federal contributions to the development of remdesivir. This report examines: (1) scientific and funding contributions provided by CDC, DOD, and NIH for the development of remdesivir, and (2) agencies' patent rights related to those contributions. GAO reviewed relevant laws and regulations; reviewed documentation from CDC, DOD, and NIH; and interviewed officials and scientists from the agencies and two universities. We also obtained information from and interviewed representatives of Gilead.

CDC, DOD, NIH, and Gilead provided technical comments, which we incorporated as appropriate.