The United States has over 80,000 troops deployed in Japan and South Korea. We found that U.S. forces help strengthen alliances, promote a free and open Indo-Pacific region, provide quick response to emergencies, and are essential for U.S. national security.

The United States incurs costs to achieve these benefits. From 2016 through 2019, the Department of Defense spent roughly $20.9 billion in Japan and $13.4 billion in South Korea to pay military salaries, construct facilities, and perform maintenance. The governments of Japan and South Korea also provided $12.6 billion and $5.8 billion, respectively, to support the U.S. presence.

Marines from the Republic of Korea Train with U.S. Marines in Pohang, South Korea 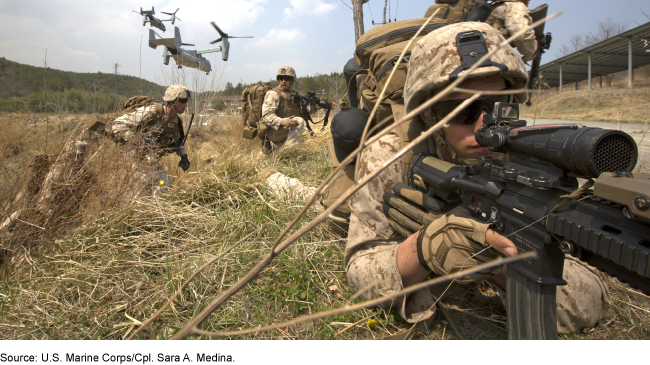 The Department of Defense (DOD) obligated $20.9 billion for its presence in Japan and $13.4 billion for its presence in South Korea from 2016 through 2019 from funds available to the Army, Navy, Air Force, and Marine Corps (see fig. 2). The military services obligated these funds from five categories, in order of size: military personnel, operation and maintenance, family housing operation and maintenance, family housing construction, and military construction.

Department of Defense Obligations to Support the Military Presence in Japan and South Korea, 2016—2019

Both DOD and the Department of State (State) report that cooperation between the U.S. and its allies Japan and South Korea is essential for confronting regional and global challenges. The decades-long forward presence of the U.S. military in those countries has undergirded these security alliances. DOD has about 55,000 troops in Japan, its largest forward-deployed force in the world. DOD has about 28,500 troops in South Korea. It spends billions of dollars annually and maintains dozens of facilities in both countries, ranging from tens of thousands of acres for training sites to single antenna outposts, in support of this presence.