Certain coastal lands provide protection from storms and rich habitats for fish and wildlife. A 1982 law limits federal spending in these areas—known as the Coastal Barrier Resources System—to discourage development.

Exceptions in the law allow agencies to fund certain types of projects. Agencies must first consult on such projects with the Fish and Wildlife Service to ask its opinion on whether the project is allowable. 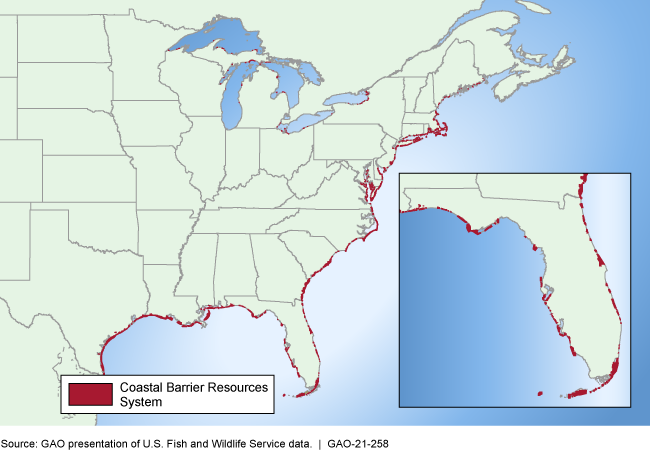 Under the Coastal Barrier Resources Act (CBRA), federal agencies must consult with the Department of the Interior's Fish and Wildlife Service (FWS) before making expenditures pursuant to statutory exceptions in certain relatively undeveloped coastal areas. These areas, designated as the Coastal Barrier Resources System (CBRS), help defend the mainland from coastal storms. However, FWS declined to provide an opinion for 18 of the 31 consultation requests GAO reviewed from selected FWS field offices for fiscal years 2018 and 2019, even though CBRA requires FWS to provide consultation when requested. This was most common in the two FWS regions that issued guidance in 2018 directing staff not to respond to such requests due to competing priorities. By ensuring that FWS guidance directs staff to provide consultation when requested, FWS could help ensure compliance with CBRA.

FWS is responsible for maintaining maps of the CBRS, and the act requires FWS to review and, if necessary, update the maps every 5 years. However, FWS has not reviewed and updated maps as often as required because of resource constraints and competing priorities, according to agency officials. FWS officials said the agency received additional funding and staff in 2015 to review maps and plans to meet the 5-year requirement in the future. However, even with the additional resources, FWS has not met the 5-year review requirement. Further, FWS does not have a strategy to guide its mapping efforts, including information on factors that may affect priorities, resource needs, and time frames. A strategy could help FWS update maps in a timely manner.

As of August 2020, U.S. Army Corps of Engineers districts in GAO's review had 51 active projects in the CBRS, most for dredging channels or nourishing beaches (see photo). The Corps uses its project planning process to document compliance with CBRA, and the agency is developing more specific CBRA guidance. Some Corps projects may be affected by a 2019 legal opinion from the Solicitor of the Interior reversing Interior's position on whether certain beach nourishment projects meet an exception under CBRA.

CBRA was enacted to remove federal incentives to develop certain areas—mostly along the Atlantic and Gulf coasts— that contain coastal barriers such as islands and wetlands. The act generally prohibits new federal expenditures and financial assistance in these areas. It allows exceptions for certain projects in the CBRS but requires federal agencies to consult with FWS before making expenditures or providing assistance within the CBRS. FWS is also responsible for maintaining and updating CBRS maps, which can be used to determine whether properties are in the CBRS.

GAO was asked to review FWS and Corps activities under CBRA. This report examines (1) FWS's consultation process and consultations by selected FWS field offices in fiscal years 2018-2019, (2) FWS's processes for updating CBRS maps, and (3) Corps projects in the CBRS and the Corps' process for complying with CBRA. GAO reviewed FWS and Corps guidance and interviewed officials at headquarters, regional, and field levels. GAO also examined documents from selected FWS field offices and Corps districts chosen based on geographic diversity and other factors.

GAO recommends that FWS (1) ensure its guidance directs staff to provide consultation when requested and (2) develop a strategy for complying with the CBRA requirement to review and, as necessary, update CBRS maps every 5 years. The Department of the Interior concurred with GAO's recommendations.