Appropriate lifesaving equipment can help increase the chance of surviving boat or ship accidents. This includes survival craft, such as lifeboats, which keep accident victims out of the water.

The U.S. Coast Guard uses accident data to determine which lifesaving equipment should be required on boats and ships. But in the data we reviewed, we found that the Coast Guard didn't collect some key data for assessing equipment effectiveness—e.g., data on types of equipment used in accidents.

We also found opportunities for the Coast Guard to improve its estimates of the cost of survival craft requirements. 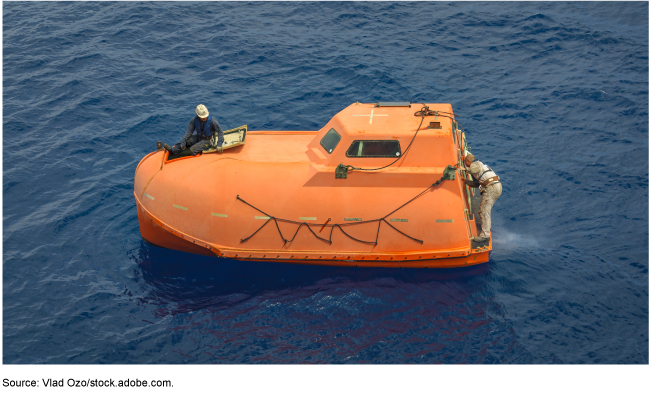 The Coast Guard estimated costs and benefits of requiring vessel owners to carry out-of-water survival craft in its 2013 and 2017 reports to Congress, but the estimates were not fully accurate or complete. The Coast Guard did not use economically justifiable discount rates to account for the time value of money nor document its rationale, as recommended by the Office of Management and Budget (OMB). In its 2013 report, this resulted in estimated net costs $32.3 million higher than if it had. By fully implementing OMB best practices, the Coast Guard can better ensure its future estimates are accurate and complete.

The Coast Guard's 1991 guidance for determining cold water areas (59 degrees Fahrenheit and below) is based on outdated water temperature data. The guidance designates cold water areas where commercial vessels are to carry certain lifesaving equipment. Our analysis of the most recent water temperature data found that temperatures increased off the Atlantic coast for all months and Pacific coast for 10 months of the year—which does not match temperatures in the guidance. For example, the data shows that, for the month of September, waters measuring over 59 degrees expanded across almost half the area in the Gulf of Maine that the Coast Guard designated as “cold water” in 1991. By reviewing its cold water areas determination guidance to determine if it reflects current temperature data, and if necessary revising it, the Coast Guard would better ensure commercial vessels are operating with appropriate lifesaving equipment.

Since 2010, the Department of Homeland Security's (DHS) Coast Guard investigated over 50,000 maritime vessel accidents, including some resulting in casualties (dead or missing persons). The Coast Guard investigates accidents and requires vessels to carry lifesaving equipment to reduce the likelihood of casualties. Among this equipment are out-of-water survival craft to ensure no part of a person is immersed in water.

The Coast Guard Authorization Act of 2016 includes a provision for GAO to examine the extent of vessel-based casualties from water immersion and the efficacy of various lifesaving equipment. This report assesses the extent the Coast Guard has (1) data from 2010 through 2019 showing vessel-based casualties and survivability; (2) estimated costs and benefits of implementing out-of-water survival craft requirements for vessel owners; and (3) guidance for designating cold water areas and corresponding equipment requirements based on the best available data. GAO reviewed Coast Guard guidance and vessel accident data and interviewed Coast Guard and industry officials.