Declining staff numbers and recent policy changes have prompted concerns about how NLRB can accomplish its mission. Also, a federal survey indicates that NLRB employees are increasingly dissatisfied.

Our 6 recommendations address these and related issues. 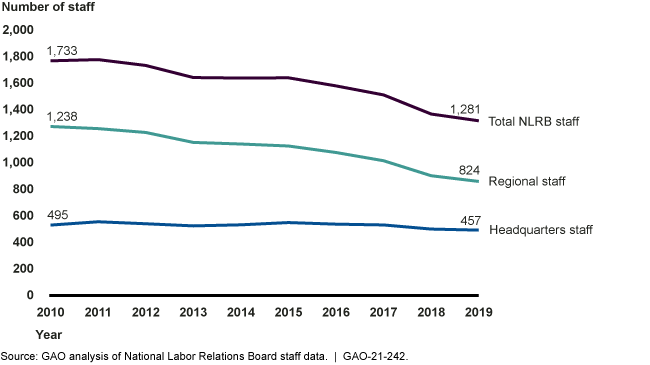 The National Labor Relations Board (NLRB) obligated most of its appropriations in fiscal years 2010 through 2017 on handling complaints of unfair labor practices and for conducting union representation elections; however, the agency has experienced a recent growth in unobligated funds. For example, more than $5 million of NLRB's fiscal year 2019 appropriations were not obligated. GAO's review and a recent NLRB Inspector General report attributed the unobligated funds to a lack of effective internal controls, and NLRB has taken steps to address several recommendations made by its Inspector General to strengthen its controls and improve its budgeting.

In addition to the recent growth in unobligated funds, the number of NLRB staff decreased from 1,733 in fiscal year 2010 to 1,281 in fiscal year 2019, or by 26 percent. NLRB officials and internal and external stakeholders partly attributed the change to a 22 percent decline in NLRB's caseload. Staff reductions were about four times greater (33 percent compared to 8 percent) in NLRB's regional offices, where casework originates, than in headquarters.

NLRB reported that it has met some of its performance measures for case processing goals since fiscal year 2015, but the agency lacks meaningful measures for others, and stakeholders identified various factors affecting NLRB's efforts to meet its goals. While NLRB reported that it met most of its recently revised timeliness measures, it lacks objective and quantifiable measures for other goals, such as organizational excellence and resource management. Without such measures, NLRB will not be able to determine its progress in meeting its goals.

While NLRB officials said they believe the emphasis on increased timeliness has helped resolve cases more promptly, several internal stakeholders said they believe it has negatively affected case quality and staff morale. Data from the Federal Employee Viewpoint Survey show NLRB employees were increasingly dissatisfied with senior leaders' policies, resource sufficiency, and their overall organization in recent years (see figure), ranking last out of all 17 medium-sized federal agencies in 2019. Without working with internal stakeholders to evaluate pressures on staff, NLRB risks over-burdening staff, which could result in reduced employee morale and work quality.

Estimates on Selected Responses in the Federal Employee Viewpoint Survey (FEVS) for National Labor Relations Board Employees, 2015 through 2019

NLRB carries out its statutory responsibility for administering and enforcing the National Labor Relations Act through two primary functions: (1) preventing employers and unions from engaging in unfair labor practices, and (2) conducting secret-ballot elections for employees to consider representation by a union. Recent increases in unobligated funds, reductions in staff levels, and policy changes at NLRB have raised concern about its ability to accomplish its mission. GAO was asked to examine the effects of these changes.

GAO is making six recommendations to NLRB, including to develop objective and quantifiable performance measures and evaluate performance pressure on staff. NLRB agreed with GAO's recommendations, and described a number of ongoing and planned actions to address them.