IRS's Taxpayer Advocate Service helps taxpayers deal with IRS by: 1) resolving individual taxpayer cases; and 2) working with IRS to resolve systemic problems that affect groups of taxpayers. The service has received over 2 million cases since 2011.

We recommended ways to improve these reports. For example, the objectives report could more clearly identify objectives and link them to planned activities to help Congress understand what the service is trying to achieve. 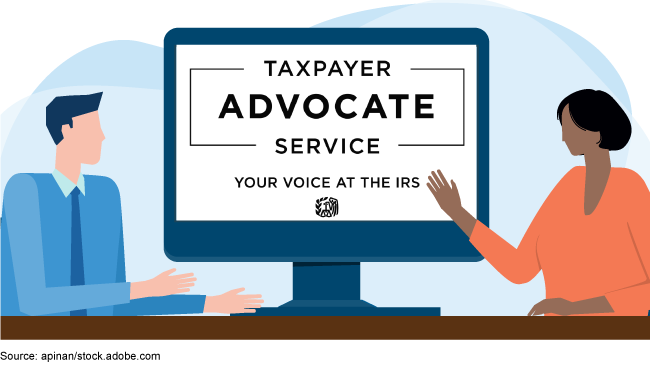 The budget for the Internal Revenue Service's (IRS) Taxpayer Advocate Service (TAS) declined by about 14 percent from fiscal years 2011 to 2020, when adjusted for inflation. For fiscal year 2020, TAS used most of its resources to assist individual taxpayers, known as case advocacy. TAS allocated about 76 percent of its $222 million budget and 86 percent of its almost 1,700 full-time equivalents to this purpose. The percentage of resources for case advocacy has decreased during the past decade—in fiscal year 2011 about 85 percent of the budget was devoted to it. For the same period, resources to address broader issues affecting groups of taxpayers, known as systemic advocacy, increased from 9 percent to 14 percent of the total budget. This shift is due in part to the reallocation of staff to better integrate systemic advocacy work and TAS's overall attrition rate more than doubling to 15.9 percent between fiscal years 2011 and 2019.

Since 2011, TAS has received more than 2 million taxpayer cases, of which almost half were referrals from other IRS offices. TAS closed more cases than it received each year from 2012 to 2017, but its inventory has grown since fiscal year 2018, due in part to attrition in case advocacy staff and an increase in taxpayers seeking assistance (see figure below).

Number of Taxpayer Cases Received and Closed, Fiscal Years 2011 to 2020 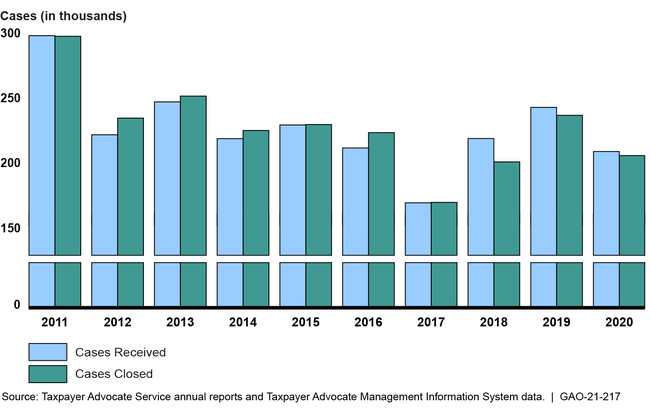 TAS has recently modified its two mandated reports to Congress by reducing their length and separately compiling legislative recommendations. It shortened its annual reports in part because the Taxpayer First Act reduced the required number of most serious taxpayer problems from “at least 20” to “the 10” most serious problems. GAO identified the following additional actions that could further improve TAS reporting.

Report outcome-oriented objectives and progress. The objectives for the upcoming fiscal year that TAS included in its most recent report are not always clearly identified and do not link to the various planned activities that are described. Further, the objectives TAS does identify do not include measurable outcomes. In addition, TAS's reports do not include the actual results achieved against objectives so it is not possible to assess related performance and progress. Improved performance reporting could help both TAS and Congress better understand which activities are contributing toward achieving TAS's objectives and where actions may be needed to address any unmet goals.

Publish updates on recommendation implementation status. By law, TAS's annual report must include an inventory of actions IRS has fully, partially, and not yet taken on TAS's recommendations to address the most serious problems facing taxpayers. If those recommendations take multiple years to implement, which some have as shown in the table below, updating the inventory would be required. In its objectives reports, TAS provides only a one-time inventory of IRS responses to TAS's recommendations made during the preceding year, including plans and preliminary actions taken for those IRS accepts for implementation. TAS does not publicly update the inventory in subsequent annual reports to reflect actions IRS takes or does not take to address TAS's recommendations. This reporting approach does not provide complete information on the status of actions IRS has taken to address serious problems facing taxpayers and also does not provide the information in the annual report, as required. Publishing such updated status information would support congressional oversight.

GAO also identified options for TAS to consider to improve its reporting. These options include explaining changes to the list of the most serious taxpayer problems from year to year and streamlining report sections congressional staff use less frequently.

TAS, an independent office within IRS, helps taxpayers resolve problems with IRS and addresses broader, systemic issues that affect groups of taxpayers by recommending administrative and legislative changes to mitigate such problems. Congress mandated that TAS issue two reports every year—one known as the annual report which includes sections on, among other things, the 10 most serious problems encountered by taxpayers, and the other known as the objectives report that discusses organizational objectives.

GAO was asked to review how TAS carries out its mission, focusing on resources and reporting. This report (1) describes TAS's resources and workload, and (2) assesses TAS's reporting to Congress and identifies opportunities for improvement.

GAO is making seven recommendations to help improve the usefulness of TAS's reports. GAO recommends, among other things, that the National Taxpayer Advocate take the following actions:

TAS agreed with all of GAO's recommendations.