Puerto Rico's economy has been in decline for much of the last 15 years and was devastated by 2017's hurricanes. To bolster and diversify its economy, Puerto Rico is trying to increase air cargo and passenger traffic at its 3 international airports. We looked at issues related to Puerto Rico's effort to expand air cargo operations.

Stakeholder views on this effort varied. For example, some said Puerto Rico's geographic location could make it a refueling and cargo distribution point, particularly for flights between Europe and Latin America, while others said the island is too close to most Latin American destinations to serve that purpose. 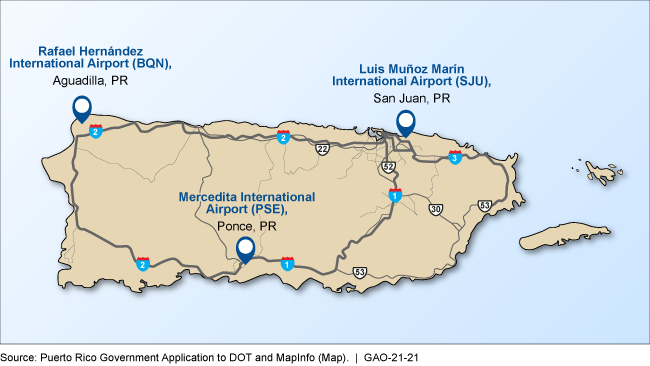 Cargo was flown by air between more than 97 countries within the selected regions of Africa, Europe, Latin America, and the U.S. that may affect air cargo expansion in Puerto Rico. However, according to Department of Transportation (DOT) and European Union data, most international air cargo transportation was concentrated at a handful of countries and at airports in these regions. For example, four countries in Europe accounted for 72 percent of the U.S.-European Union air cargo transported, by weight. Likewise for airports, Miami International Airport accounted for 70 percent of air cargo transported between the U.S. and Latin America. Worldwide, cargo-only carriers transported on average 13.8 billion pounds of air cargo to and from the U.S. from 2016 through 2018. Of that cargo, two of the selected regions—Latin America and Europe—when combined accounted for 46 percent.

Air Cargo Transported by Cargo-Only Airlines between the U.S. and Global Regions, Average Weight in Millions of Pounds, 2016 through 2018

Based on interviews with industry stakeholders and studies reviewed. GAO identified four factors that are generally associated with an airport's ability to attract air cargo traffic: (1) an airport's geographical location; (2) its proximity to transportation networks; (3) its supporting airport infrastructure and resources; and (4) the governmental and regulatory environments. For example, an airport located near businesses that generate large volumes of both inbound and outbound cargo that could be transported by air may be an important geographic factor for air carriers.

Puerto Rican government and industry stakeholders GAO spoke with said that increased air cargo would benefit its airports and lead to positive effects on the Puerto Rican economy. For example, officials noted that expansion of air cargo operations could increase the use of underutilized airports and create opportunities for existing industry—such as the pharmaceutical, medical device, and aerospace industries—and help develop new ones. Puerto Rican and industry stakeholders had varying perspectives on the potential for Puerto Rico's expanding its air cargo operations. For example, some stakeholders said Puerto Rico's geographic location may allow it to serve as a refueling and cargo distribution point, particularly for flights between Europe and Latin America, while others said the island may be too close to some Latin American destinations to serve that purpose. Whether and to what extent Puerto Rico can increase air cargo operations depends on how air carriers weigh the various factors discussed above.

Puerto Rico's economy has been in decline for much of the last 15 years and was devastated by hurricanes in 2017. Puerto Rico has sought to increase air cargo and passenger traffic at its international airports as a means to bolster and diversify its economy. Specifically, Puerto Rico seeks to serve as a transshipment point for transferring cargo between air carriers flying from Europe to Latin America. Air cargo, whether carried in the holds of passenger aircraft or by cargo-only aircraft, is an important component of global trade.

The FAA Reauthorization Act of 2018 includes a provision for GAO to study the international air cargo transportation services among the United States and the African, Latin American, and European regions and the potential expansion of air cargo operations in Puerto Rico. This report addresses (1) what is known about air cargo operations between these world regions; (2) factors affecting the development of air cargo markets; and (3) Puerto Rican officials' and selected industry stakeholders' views on the economic effect and potential of expanding air cargo operations in Puerto Rico. GAO analyzed DOT and European air cargo data for flights between the U.S. and the selected regions for 2016 through 2018 (the latest available data). GAO also interviewed officials from DOT, and stakeholders from Puerto Rico and the air-cargo industry, selected based on prior GAO work and stakeholder mission.