We were asked to review helicopter noise in the Washington, D.C., area, where numerous flights support government, national security, and medical operations. There were about 88,000 helicopter flights within 30 miles of Reagan National Airport in 2017-19, including about 33,000 military and 18,000 law enforcement flights.

The Federal Aviation Administration has improved its ability to identify and respond to noise complaints. But the FAA and helicopter operators don't always tell each other about the complaints they receive. We recommended that the FAA develop a way to share this information to improve responses to these complaints. 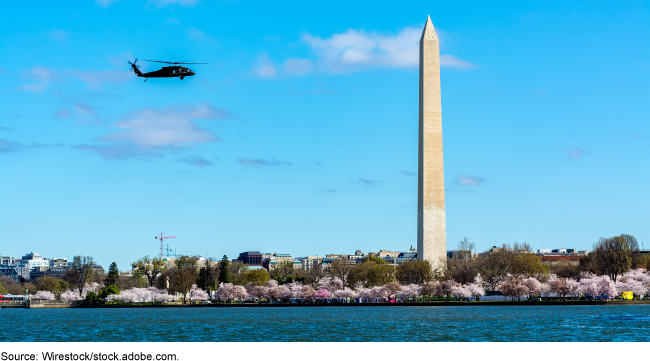 According to Federal Aviation Administration (FAA) data for 2017 through 2019, over 50 helicopter operators conducted approximately 88,000 helicopter flights within 30 miles of Ronald Reagan Washington National Airport (D.C. area), though limited data on noise from these flights exist. According to operators, these flights supported various missions (see table below). While the number of flights has decreased slightly over the 3 years reviewed, it is unknown whether there has been a change in helicopter noise in the area. For example, most stakeholders do not collect noise data, and existing studies of helicopter noise in the area are limited. D.C. area airspace constraints—such as lower maximum altitudes near urban areas—combined with proximity to frequently traveled helicopter routes and operational factors may affect the noise heard by residents.

Note: In this table, we refer to the Washington, D.C. area as including the area within 30 miles of Ronald Reagan Washington National Airport.

aIncludes 666 flights for which FAA could not identify an operator or mission based on available historical records.

Helicopter noise can potentially expose members of the public to a variety of negative effects, ranging from annoyance to more serious medical issues. FAA is responsible for managing navigable U.S. airspace and regulating noise from civil helicopter operations. Residents of the D.C. area have raised concerns about the number of helicopter flights and the resulting noise.

GAO recommends that FAA develop a mechanism to exchange helicopter noise information with operators in the D.C. area. FAA agreed with GAO's recommendation.