Following two deadly ship collisions in 2017, the U.S. Navy looked closely at Surface Warfare Officers who command and operate surface ships at sea. The Navy made minor changes to the officers' career path, such as extending training and tours of duty. It hadn't regularly evaluated or changed this career path in over a century.

Most officers believe that specialized career paths would better prepare them for their duties, compared to the generalist path that the Navy currently has.

Our recommendations include that the Navy routinely evaluate current and possible alternative career paths to best train and retain Surface Warfare Officers. 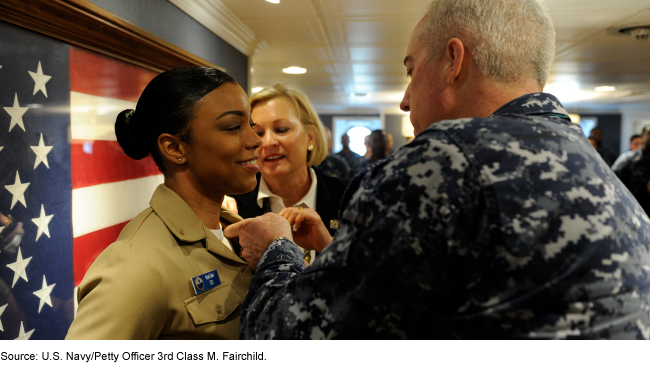 GAO found that after 10 years of service, around the first major career milestone:

By using existing information to develop a plan to improve SWO retention, the Navy will be better positioned to retain a diverse and combat-ready community.

The career path for U.S. Navy SWOs differs from those in similar positions in selected foreign navies and other U.S. Navy and U.S. maritime communities.

The U.S. Navy made incremental career path changes for SWOs following the 2017 collisions, but has not regularly evaluated or fundamentally changed its SWO career path for over a century. GAO found that by a factor of four to one, SWOs believe specialized career paths would better prepare them for their duties than the current generalist career path. Without periodic evaluations of current approaches, including alternative career paths, and the use of those evaluations, the U.S. Navy may miss an opportunity to develop and retain proficient SWOs.

SWOs are U.S. Navy officers whose primary duties focus on the safe operation of surface ships at sea. In 2017, the Navy had two collisions at sea that resulted in the death of 17 sailors and hundreds of millions of dollars in damage to Navy ships. Following the collisions, the Navy identified deficiencies in the SWO career path and staffing policies, and took action to improve these areas.

The John S. McCain National Defense Authorization Act for Fiscal Year 2019 contained a provision that GAO assess issues related to the U.S. Navy SWO career path. Among other things, this report (1) assesses trends in separation rates of SWOs with those of similar U.S. Navy officer communities, and trends in SWO separation rates by gender; (2) describes how the career path of U.S. Navy SWOs compares to those of selected foreign navies and other U.S. Navy and U.S. maritime communities; and (3) assesses the extent to which the U.S. Navy has used or evaluated alternative career paths. GAO analyzed U.S. Navy officer personnel data; selected foreign navies and U.S. maritime officer communities for comparison; and surveyed a generalizable sample of Navy SWOs.