First responders stopped on the side of the road risk being struck by passing vehicles. To protect these workers, all states and D.C. enacted "Move Over" laws that require motorists to move over to another lane or slow down when they pass a roadside incident.

The Department of Transportation helps state officials educate the public about Move Over laws and administers funding that state officials can use for enforcement efforts. It also trains first responders in protecting themselves on the roadside.

The Department is planning to study motorist behaviors that contribute to roadside incidents and technologies that protect first responders.

A Motorist Complying with a Move Over Law Requirement 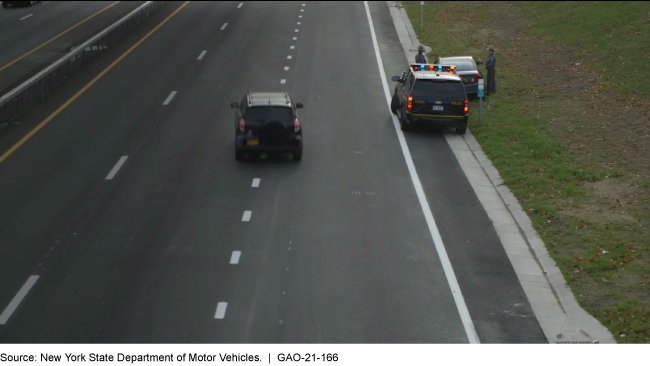 Move Over laws vary by state but generally require motorists to move over a lane or slow down, or both, when approaching emergency response vehicles with flashing lights stopped on the roadside. U.S. Department of Transportation's (DOT) National Highway Traffic Safety Administration (NHTSA) data provide limited information on whether crashes involved violations of these state laws, but the agency is taking steps to collect additional data. For instance, NHTSA's 2018 data show 112 fatalities from crashes involving emergency vehicles, representing 0.3 percent of all traffic fatalities that year, but these data cannot be used to definitively identify which crashes involved a violation of Move Over laws. NHTSA is proposing updates to the data that it encourages states to include on crash report forms to better identify crashes involving violations of Move Over laws, and plans to convene an expert panel and initiate a pilot project to study further data improvements.

Selected state officials reported that they have taken actions to improve public education and enforcement of Move Over laws but still face challenges in both areas. Such actions include education through various forms of media and regional coordination among states to conduct targeted enforcement of Move Over laws within their respective borders during the same time period. State officials cited raising public awareness as the most prevalent challenge, as motorists may not know the law exists or its specific requirements. Variation in the requirements of some Move Over laws—such as for which emergency vehicles motorists are required to move over—may contribute to challenges in educating the public about these laws, according to state officials.

DOT has taken actions and is planning others to help improve emergency responder roadside safety. NHTSA helps states promote public awareness of Move Over laws by developing and disseminating marketing materials states can use to develop their own traffic safety campaigns. NHTSA also administers funding that states can use for public awareness activities or enforcement initiatives related to emergency responder safety. FHWA has coordinated with a network of stakeholders across the country to train emergency responders on traffic incident management best practices. Finally, in response to congressional direction, NHTSA officials are planning several research efforts intended to enhance emergency responder safety, including studies on motorist behaviors that contribute to roadside incidents and technologies that protect law enforcement officials, first responders, roadside crews and other responders.

Police, fire, medical, towing, and other responders risk being killed or injured by passing vehicles when responding to a roadside emergency. To protect these vulnerable workers and improve highway safety, all states and the District of Columbia have enacted Move Over laws.

GAO was asked to review issues related to Move Over laws and emergency responder roadside safety. This report: (1) examines data NHTSA collects on crashes involving violations of Move Over laws, (2) describes selected states' actions and challenges related to Move Over laws, and (3) describes DOT efforts to improve emergency responder roadside safety. GAO analyzed NHTSA's 2018 crash data, which were the latest data available; reviewed federal and state laws and regulations, and DOT initiatives to improve emergency responder roadside safety; reviewed state reports to DOT; and interviewed NHTSA and FHWA officials, traffic safely and law enforcement officials in seven selected states, and stakeholders from traffic safety organizations and occupational groups, such as the Emergency Responder Safety Institute and the International Association of Chiefs of Police. GAO selected states based on a variety of factors, including traffic fatality rates per vehicle mile traveled and recommendations from stakeholders.

DOT provided technical comments, which we incorporated as appropriate.

Move Over! How Are Governments Trying to Protect First Responders From Roadside Crashes? (video)