The Federal Aviation Administration is working with industry and stakeholders, including NASA, to develop a drone traffic management system. The FAA establishes rules for operating drones, while industry service providers coordinate flights.

The FAA recently concluded a pilot of the system. It will use the results to evaluate technologies and create an implementation plan. The FAA has yet to provide timelines and upcoming steps to stakeholders. We recommend that the FAA further inform stakeholders of its efforts so they can align their activities with the system rollout and that the FAA develop performance goals for the implementation plan. 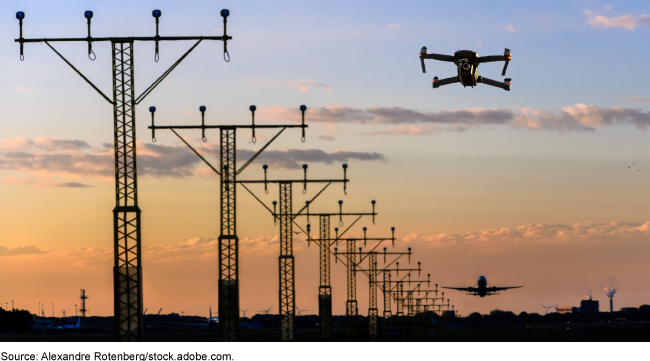 The Federal Aviation Administration (FAA) is working with industry and public stakeholders to develop a traffic management system for unmanned aircraft systems (UAS), also known as drones. The UAS traffic management ecosystem (referred to as UTM) involves developing a framework of interconnected systems for managing multiple UAS operations. Under UTM, FAA would first establish rules for operating UAS, and UAS-industry service providers and operators would then coordinate the execution of flights. Operators would likely be able to access UTM, for example, through smart phone applications to map routes for UAS flights and check for flight restrictions. FAA began collaborating in 2015 with the National Aeronautics and Space Administration (NASA) to establish and implement a framework to research, develop, and test increasingly complex UTM concepts and capabilities with industry stakeholders. For example, in one scenario tested in Virginia, UAS operators using UTM were alerted to a rescue helicopter, allowing the operators to avoid the area.

To further develop and implement UTM, FAA conducted tests through its UTM pilot program, completed in November 2020, and is working on a UTM implementation plan. However, industry stakeholders said they need more information on the next steps, and it is uncertain whether FAA's plan will include performance goals and measures. FAA has reported that it plans to use results from the pilot program to inform its implementation plan, statutorily required one year after the pilot program concludes. UAS stakeholders generally agreed with FAA's approach for moving UTM toward implementation. However, they said that they face planning challenges because FAA provides limited information on timing and substance of next steps, such as areas of UTM technology that FAA will focus on during testing. In addition, FAA has not indicated whether the implementation plan will include performance goals and measures, instead stating that such metrics are not statutorily required. Providing more data to the UAS industry and public stakeholders in the short term and including goals and metrics in the plan could help stakeholders make informed decisions and better align their activities with FAA plans for UTM testing and implementation.

UAS have potential to provide significant social and economic benefits in the U.S. FAA is tasked with safely integrating UAS into the national airspace. UTM, as planned, will be a traffic management system where UAS operators and service providers are responsible for the coordination and management of operations at low altitudes (below 400 feet), with rules established by FAA.

The FAA Reauthorization Act of 2018 included a provision for GAO to review infrastructure requirements for monitoring UAS at low altitude. This report examines, among other things, the actions FAA has taken to develop UTM and additional steps needed to achieve UTM's implementation.

GAO is recommending that FAA: (1) provide stakeholders with additional information on the timing and substance of UTM testing and implementation efforts using FAA's UTM website or other appropriate means, and (2) develop performance goals and measures for its UTM implementation plan. The Department of Transportation generally concurred with these recommendations.